Literature / Alien in a Small Town 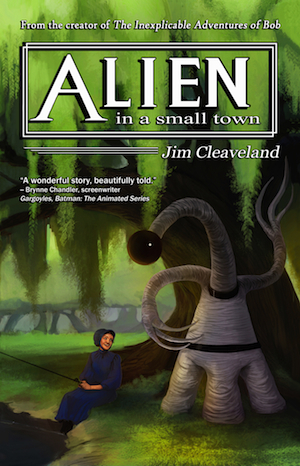 Some centuries in the future, Earth has entered into an alliance with a race of silicon-based nonhumanoid aliens called the Jan, and permitted them to establish a colony on Jupiter's moon Callisto, in exchange for helping humanity establish itself in the wider interstellar community.

And although they are perfectly aware of all this, it has had little effect on the everyday lives of the technology-shunning Mennonites of central Pennsylvania, who continue to live much as they have since the seventeenth century.

30-year old Indira Fenstermacher left her Mennonite community ten years ago, learned the ways of the outside world, got a job on a space station... but has now returned in the wake of a personal tragedy.

"Paul Dwightson," (his real name unpronounceable) is a Jan who has made the bizarre choice to live on Earth among humans (bizarre because, although the two races are on friendly terms, Jan physiology can barely tolerate Earth's environmental conditions) and learn as much about us as possible. When pressed, he claims his actions are part of a religious vow, the nature of which he is reluctant to discuss. After a chance encounter with Indira, he chooses to live, of all places, among the Mennonites. The friendship he forms with Indira, and the difficulties that come with it, form the backbone of the story.