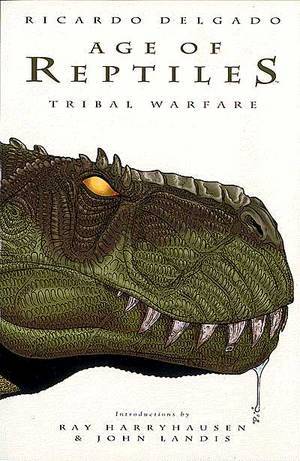 Age of Reptiles is a comic series 'written' (you'll see why later) and illustrated by Ricardo Delgado, and published by Dark Horse Comics. It follows the lives of dinosaurs in prehistoric times.
Advertisement:

The series consists of four miniseries:

The strangest aspect of Age of Reptiles is that it uses no sounds. The dinosaurs do not talk, nor are there written sound effects or narration. It stands on the art alone. The Discovery Channel documentary series Dinosaur Revolution was initially intended as a loose adaptation of the series with Ricardo Delgado serving as one of the creative leaders of the animated vignettes.

Not to be confused with the trope Age of Reptiles.