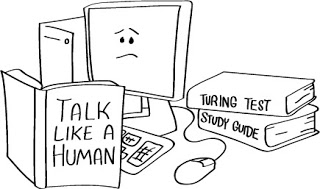 For this test, you need to have higher than C++ to pass.
"A computer would deserve to be called intelligent if it could deceive a human into believing that it was human."
— Alan Turing
Advertisement:

In computer science, a Turing Test

is a computer's attempt to demonstrate human intelligence. It's a test of an AI's quality, usually by carrying through a conversation with a user by text-only chat. If the user can't reliably tell the difference between the AI and another user chatting the same way, the AI passes. At heart, the Turing Test is a machine attempting to prove it is a human. Comedic extensions of the test may include persuading the tester that the other test-ee is the AI, or that they themselves are the AI.

In the real world, the test is not considered a reasonable standard for determining computer intelligence, though it remains a fun challenge for AI programmers to try to overcome. In the world of science fiction, however, this test becomes Serious Business for the machines involved. In worlds with Ridiculously Human Robots and Artificial Humans, this test is useful for determining who is flesh and blood, and who is steel and silicon.

The test relies on the inherent differences between an AI and a real human mind. It can involve asking questions only a human being would be able to answer, such as ruminating on matters of emotion and love. It might also involve resolving paradoxes and handling concepts other machines would be unable to compute. Conversely, it can also be used to determine if a given character is NOT human, either by failing the test, or by its inverse. For example, in works with a Robot War, the Turing Test is useful in keeping the evil robot army from infiltrating the base of La Résistance and killing all humans, or it can be used to fool said robot army into letting the meatbag walk in freely.

A subtrope of Artificial Intelligence. This trope can appear at all ends of the Sliding Scale of Robot Intelligence, but tends to appear at the higher end, where the 'bots will be more human-like. The Alternative Turing Test is a subtrope that focuses on a series of puzzles or traps that serve as the test. Those who pass the Turing Test may have undergone Mechanical Evolution, or something as simple as being struck by lightning.