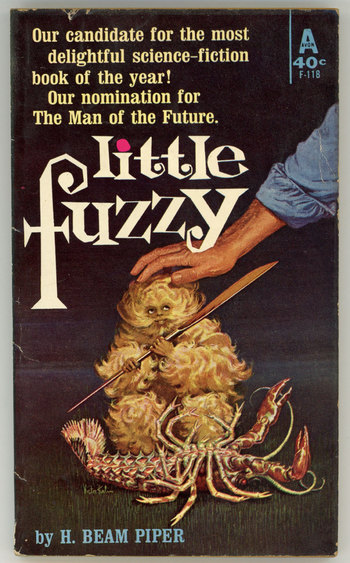 This trope is all about creatures (humanoid or otherwise) who are denoted as "people" by their use of accessories such as tools, regardless of the characters being otherwise nude.

A pet animal might commonly wear a collar, but would not normally wear a coin pouch, tools, a weapon or a timepiece. Accessories of that kind would normally be a clear indication of "personhood" for the wearer, regardless of the character being otherwise nude.

The heroic space explorer is on an alien planet which seems to at least be able to sustain life as we know it. Perhaps the explorer is a scientist examining a soil sample outside her space tent. Suddenly there's a noise and the explorer looks up to behold one of the weird native lifeforms staring at her from the edge of the clearing.

"I wonder what that animal wants?" thinks the explorer. Then she realises: The creature, although otherwise nude, is wearing a belt holding a small sack, a hammer and a dagger!

The heroic space explorer is about to make First Contact!

If the character uses the accessories for their intended purpose, this would be an even more decisive indicator that the character is a person and not an animal.

This is a subtrope of Funny Animal but this trope occurs when the being is initially presumed to be non-sapient by both protagonists and audience and the being's sapience is revealed by its artifacts.