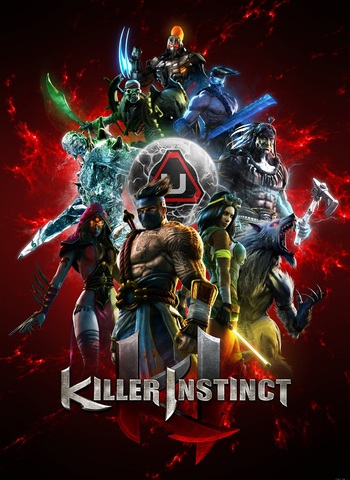 C-C-C-C-COMBO BREAKER!
"Coming to your home in 2013, only on Xbox One..."
— The E3 2013 trailer for Killer Instinct. Ironically, they didn't fulfill this either. note The game was initially Xbox One-exclusive, but later received a port to PC. This mirrors how the original KI never made it to Ultra 64 either, despite its advertisement.
Advertisement:

After a 17 year-long hiatus since the last installment, the Killer Instinct franchise made its triumphant return. Titled simply "Killer Instinct" (known among fans as Killer Instinct 2013), the game first released on November 22, 2013 as a launch title and Killer App for the Xbox One. It was also later ported to PC in 2016.

Starting out with a tiny roster of six characters, regular updates over three separate Seasons (a trend followed by later games such as Street Fighter V) brought the cast up to a sizeable 29 characters and added all sorts of features. Season 1 was handled by Double Helix Games, but after they were acquired by Amazon, development was handed over to Iron Galaxy Studios for Season 2 and beyond.

The game has been lauded for its surprisingly deep gameplay, which is a great improvement over the somewhat button mash-y originals. While retaining the classic Combo Breakers the series is known for, it also introduced Counter Breaker reversals, Shadow Counter punishers, Lockout punishments, Instinct Mode power-ups, and much more, resulting in some of the most compelling mind-games to hit the fighting game genre. The creative character designs, both in terms of art and combat, are also celebrated, and the game's sound design and music is phenomenal, since the team got Atlas Plug, Celldweller, and the legendary Mick Gordon as composers.

The plot features a rebooted Killer Instinct universe, reusing many of the familiar storylines and ideas of the original but now in a new setting and context. Gone is Ultratech's "Killer Instinct" tournament, as they are no longer an Obviously Evil Mega-Corp; now they're a benevolent Mega-Corp secretly planning to summon ancient horrors to test humanity, and a group of rebel heroes is trying to stop them. The plot is split into three different game modes, one for each season of content:

After Season 3's completion, several more characters and updates were released to tie the game up. However, as of 2018 the game's updates ceased, and it seems to have settled comfortably into its final state. In 2020, it received a final update on Xbox One to ensure its backwards compatibility on the Xbox Series X|S.