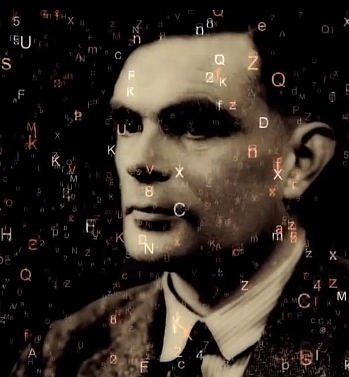 Alan Mathison Turing OBE FRS ( 23 June 1912 – 7 June 1954) was a British computer scientist. He is the Trope Namer for Turing Test, so called because he invented it. note  He didn't name it that, though; in his 1950 paper "Computing Machinery and Intelligence" he refers to it as an "imitation game".

Turing was a hero of World War II, devising cryptanalytical techniques, including those that cracked the ENIGMA machine, helping the Allied war effort by enabling the reading of encrypted radio messages. This confirmed information provided by other sources and even yielded otherwise unavailable information (such as the real strength of German units, which could differ from Soviet and Anglo-American estimates). After the war Turing's work constituted the foundation of twentieth century computing (for the gory details see The Other Wiki's articles on Turing machines

and the Church-Turing thesis

In 1936, Turing went to Princeton University in America, returning to Britain in 1938. He began to work secretly part-time for the British cryptanalytic department, the Government Code and Cypher School. On the outbreak of war he took up full-time work at its headquarters, Bletchley Park.

Here he played a vital role in deciphering the messages encrypted by the German Enigma machine, which provided highly useful intelligence for the western Allies and - through official British communiques and Soviet spies - mildly useful information for the Soviets. He took the lead in a team that designed a machine known as a bombe that successfully decoded German messages. He became a well-known and rather eccentric figure at Bletchley.

A lesser-known fact about Turing is that he was also an accomplished physical athlete, a marathon-runner good enough to have had trials for the British Olympic team. This fed into his eccentricities: during the war he would travel from Bletchley to meetings in London by running.

After the war, Turing turned his thoughts to the development of a machine that would logically process information. He worked first for the National Physical Laboratory (1945-1948). His plans were dismissed by his colleagues and the lab lost out on being the first to design a digital computer. It is thought that Turing's blueprint would have secured them the honour, as his machine was capable of computation speeds higher than the others. In 1949, he went to Manchester University where he directed the computing laboratory and developed a body of work that helped to form the basis for the field of artificial intelligence. In 1951 he was elected a fellow of the Royal Society.

In 1952, Turing was prosecuted for homosexuality, an imprisonable crime at the time, under the charge of Gross Indecency. Rather than face a prison sentence, Turing underwent chemical castration by the injection of synthetic oestrogen and lost his security clearance. He was barred from his previous position with GCHQ. In 1954, Turing was found dead; an autopsy showed the cause to be cyanide poisoning and it was ruled a suicide. Predictably speculation lingers on whether it was suicide, murder, or accident from sloppy chemical work, but the case is ambiguous enough for there to be significant doubt. Curiously a half-eaten apple was found at the scene but was never tested for poison.

The British government in response to a successful petition officially apologized for the way he was treated in 2009, and he received a royal pardon on Christmas Eve, 2013. Very rare in the British justice system, which normally handles such cases by other means, this is only the fourth use of the royal prerogative of mercy granted since WWII. In 2017 this was extended to other men convicted under the law, who were retroactively pardoned, under a law popular known as the "Alan Turing Law." That many of the men pardoned thus were long-dead (among them Oscar Wilde) was seen as a Bittersweet Ending.

For Turing's proof of the undecidability of the Halting Problem, see this poem