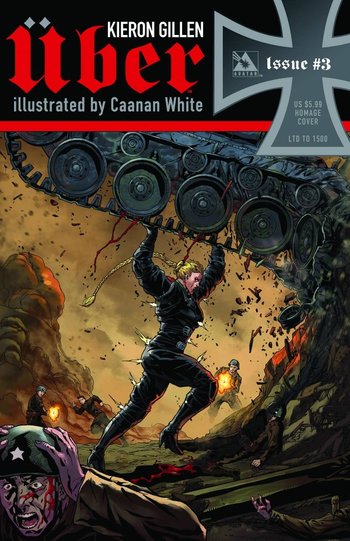 Beware the superwoman.
"It doesn't matter if Spider-Man's fighting Galactus — Spider-Man will find a way to beat Galactus. Über isn't that story. Über is the story that every single time, Galactus will kill Spider-Man."
— Kieron Gillen
Advertisement:

Über is an ongoing comic book series published by Avatar Press and written by Kieron Gillen, with art by Canaan White, Daniel Gete and Gabriel Andrade. Its first issue appeared in 2013. Like many Avatar Press books, it explores extremely dark themes of bloodshed, depravity, and dehumanization using sci-fi and fantasy elements. The series took a break for much of 2016 after 27 issues, before a partially crowd-funded second volume launched at the end of the year, with the new overall title of Über: Invasion. It's scheduled to run for 60 issues total.

Written as a deconstruction of the concept of Stupid Jetpack Hitler and of classic superhero tropes, the story begins just before the end of World War II in Europe. Days before the Third Reich's defeat, with the forces of Zhukov's 1st Belorussian Front and Konev's 2nd Ukrainian Front storming Berlin, a breakthrough is made—the Nazis successfully create superhuman soldiers. With super-strength, bulletproof skin and matter-disrupting energy beams, the "Übermenschen" save Hitler's regime from certain collapse, fundamentally changing the nature of warfare in the process. Unable to defeat the Übers through conventional means, the Allies are forced to develop superhumans of their own. Things rapidly go downhill for the Nazis and Allies alike.

If you're looking for a typical feel-good superhero story where plucky good guys can win against vastly stronger foes... look elsewhere. Über has no clear protagonists, an atmosphere of extreme moral ambiguity, and a profusion of blood and gore. Aside from its science-fiction elements, it's a brutally realistic war story which, in its creator's words, "is not meant to be enjoyed".

Win? No, it's too late for that. We can't ever win. We can just ensure everybody loses.