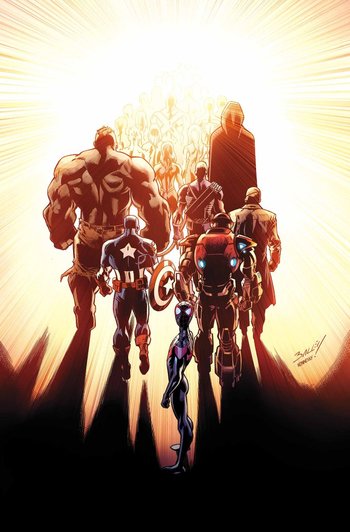 The end... at least for the moment.
Advertisement:

Ultimate End is a 2015 series, part of the Secret Wars (2015) crossover. It is the last story set in the Ultimate Marvel universe.

Actually, no. The Ultimate Marvel universe was destroyed in Secret Wars #1, alongside the prime universe and all other universes. The story is set in one of the realms of "Battleworld", a patchwork world created by Doom from the portions of several lost universes. This realm features New York, with the heroes of both universes living together. In many cases, this includes two versions of the same person. Both groups live under the assumption that their realms got mixed as a result of some experiment gone wrong, but can't fix it because the Thors, Doom's praetorian guard, do not allow any of that. The tension between both groups rises, and it is about to turn into an all-out war.

And then, Miles Morales (one of the few survivors of the universal destruction, and one of the main characters of the main series) shows up to interrupt the fight. He tells the truth to all the heroes: that initially they were once whole universes, and that Doom is keeping them mixed on purpose as a punishment because they opposed him in the past. The heroes then cease the conflict and agree to take the fight to Doom himself.

It should be noted that, as per the First Law of Resurrection, the end of the Ultimate Universe was just temporary. Several characters were moved into the mainstream universe, and the universe itself was restored at the end of Spider-Men II, in 2017.