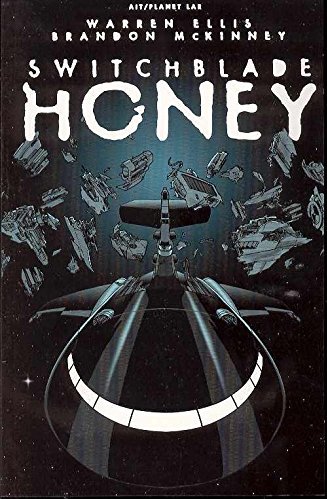 Back in the early Aughts, Warren Ellis watched an episode of Star Trek: Voyager. The man who Bromanced Patrick Stewart described it as "Katharine Hepburn impersonating William Shatner". Out of sheer exasperation, he cried out, "They should get Ray Winstone as captain". The result was a July, 2003 graphic novel using said idea. Hilarity Ensues....

Two Hundred Years From Today, Earth is fighting losing an interstellar war with a Jerkass Herd Mind known as the Chasta. General Ripper comes up with a desperate strategy. "We can't be the U.S. Marines anymore. Now we have to be the Viet Cong." The result is the experimental guerrilla space destroyer Switchblade Honey. He hoped to build eight more. He got the one.

They've all been fucked by the Navy. They're all pretty disgusted with the human race. Hell, they're probably only three steps from trying to kill each other.

And they're pretty much the only hope we have left.