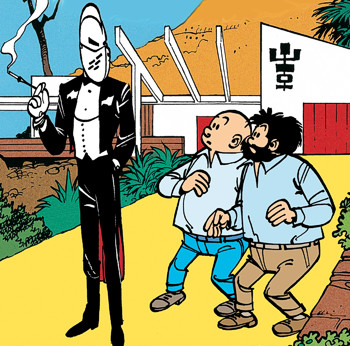 The principal cast. Note how the villain is actually more prominent...
Advertisement:

Tif et Tondu is a Belgian comic book series that counts 45 albums. It was originally created by Fernand Dineur in 1938 in Spirou magazine. The art was eventually handled by Willy "Will" Maltaite, and several writers followed, including the most influential, Maurice Rosy. The series ended with Alain Sikorski (art) and Denis Lapière (writing).

The plot is about two short fat guys called Tif and Tondu, a bald guy and a hairy and bearded guy. In the very beginning, Tif was on his own and a few weeks later, he met Tondu.

The heroes being not much more than Everymen, the series became popular mostly for its main villain: Monsieur Choc (created by Rosy), head of Nebulous Evil Organisation The White Hand, and being the reason the series is still remembered today. Tall and thin, wearing a tuxedo and his head being hidden by a knight's helmet and occasionally smoking with a cigarette holder, he was considered one of the great examples of evil coolness. Albums featuring him as the villain got a re-edit, with him prominently displayed.

Despite their names, Tif (slang for "hair") is the bald one and Tondu ("shaven") is the hairy and bearded one.

Interestingly enough, the series did get a prequel series titled Choc: Les Fantômes de Knightgrave (Choc: The Ghosts of Knightgrave) which however revolves around Monsieur Choc. This is little wonder, considering he's one of the most interesting characters in Franco-Belgian comic book history. The sheer number of tropes below that are based on him are proof of this.