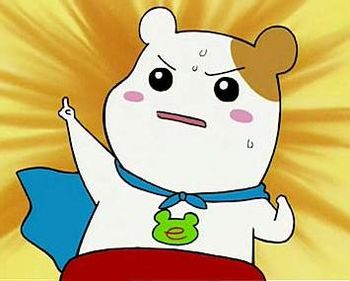 "Ebichuman is going to save your sex life!!"
"That's the wrong hole!"
—Ebichu
Advertisement:

a.k.a. Ebichu Minds the House; Ebichu the Housekeeping Hamster

Ebichu is the talking pet hamster of a woman identified only as "Owner", "O.L.", or "Office Lady", a 25 year old, technically single woman facing Christmas Cake status. O.L.'s life consists of trying to get by, negotiating the hazards of dating her philandering boyfriend "Kaishounachi" — a nickname literally meaning "useless" — and beating Ebichu like an ugly redheaded stepchild on Sunday for minor infractions and major insults. Ebichu's life consists of thankless housework, cheese, an astonishing lack of anything remotely resembling tact, an unfortunate tendency to interrupt O.L. and Kaishounachi in flagrante delicto, and getting beaten violently. Around this core swims a sea of perverts, private moments made public, illicit liaisons, promiscuity, and the odd side character who finds Ebichu sexually attractive.

Kid's fare, this is not.

The show was originally part of an anthology series (Ai no Awa-awa Hour) and each episode is approximately eight minutes apiece. While the other two components were reputedly much tamer (and forgotten by the fanbase) the good people at Studio Gainax apparently took advantage of the late-night time slot to push the envelope as to what Japanese censors would allow. The result was a frequently hilarious, incredibly irreverent show whose short format perfectly suited the rapid-fire verbal and visual zingers.

According to one source, the origin of the anime stems from the production of Neon Genesis Evangelion; Kotono Mitsuishi would read the Yonkoma manga between takes to lighten the mood, often showing others why she was laughing. The decision was eventually made to animate it for Ai no Awa-awa, and the lead role was promptly offered to Mitsuishi.

The series eventually received a follow-up manga called Oruchuban Ebichu Chu~ which follows Ebichu housekeeping again for Office Lady and Kaishonachi after they have married and given birth to two daughters.

For those not easily offended, it is an enjoyable series which would not require a huge investment of time to see. Absolutely no relation to Hamtaro!

Why hamsters shouldn't get drunk.

Why hamsters shouldn't get drunk.