Anime / The World Ends with You 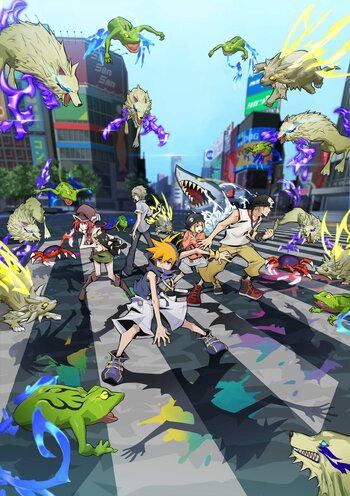 The World Ends With You: The Animation is the 2021 anime adaptation of Square Enix's Urban Fantasy Action RPG The World Ends With You, originally released in 2007 for the Nintendo DS. Animated by DOMERICA and Shin-Ei Animation with music by Takeharu Ishimoto, the anime premiered on April 10th, 2021 as part of the Spring 2021 anime season. The anime was made to help fans unfamiliar with the original game to catch up on the game's story prior to the release of its sequel, NEO: The World Ends with You.

The anime follows Neku Sakuraba, an asocial Japanese teen who suddenly awakens in the middle of Shibuya's Scramble Crossing, with no recollection of how or why he got there. Neku soon learns that he has been chosen to take part in the "Reaper's Game", a week-long life-or-death struggle where victory means survival and reclaiming his lost memories, while failure means being erased from existence... literally.

Resistant as he is to associating with others, Neku finds himself in a testy partnership with another Player of the Game, the chatty and fashion-obsessed Shiki Misaki. Through his interactions with her and other Players, Neku slowly learns to open himself up to the world and broaden his horizons, and together they must overcome their differences to survive the Reaper's Game and win back their freedom.

Alternative Title(s): The World Ends With You The Animation