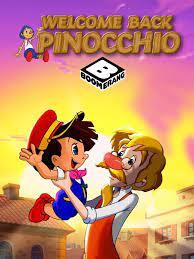 Welcome Back Pinocchio (original title Bentornato Pinocchio) is a 2007 animated movie made by Mondo TV as a sort of sequel to The Adventures of Pinocchio.

Pinocchio, now a real child, gets stuck in a large mess when he's tricked to steal money from the school he frequents and ends up returning to his old puppet form. He starts a journey to search the Blue Fairy (who earlier came to Geppetto to tell him she's going away for a while, but he forgot to inform Pinocchio) and ultimately ends up Saving Christmas.