Film / We Summon the Darkness 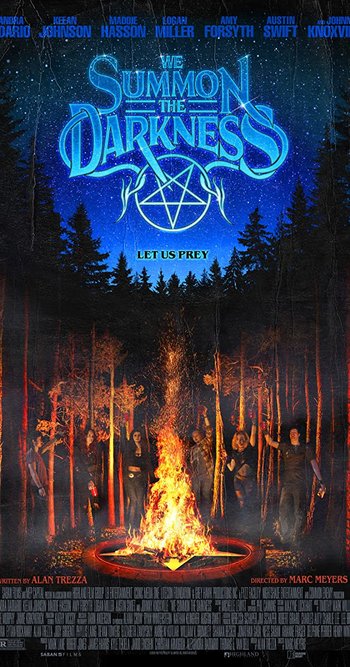 It's going to be one hell of a party.
We Summon the Darkness is a 2019 horror/thriller film directed by Marc Myers, written by Alan Trezza, and starring Alexandra Daddario, Keean Johnson, Maddie Hasson, Amy Forsyth, Logan Miller, Austin Swift, and Johnny Knoxville. It premiered at Fantastic Fest on September 21, 2019 before being released on demand by Saban Films on April 10, 2020.
Advertisement:

Set in Indiana, 1988, Alexis (Daddario), Val (Hasson), and Bev (Forsyth) are three friends who head to a heavy metal concert during the Satanic Panic. They pick up three guys, Mark (Keean Johnson), Kovacs (Miller), and Ivan (Austin Swift), and bring them back to Alexis's father's house for a night of fun that soon takes a dark turn for everyone involved.