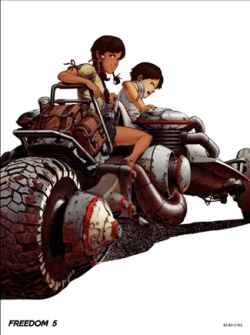 Not much changed in the future.
Advertisement:

The Freedom Project was created to celebrate Nissin Cup Noodles' 35th anniversary in 2006. The centerpiece of the project was a 7-part OVA released throughout that year. The character and mechanical designs for the project were done by Katsuhiro Otomo of AKIRA fame.

Centuries in the future, the space station Freeport dropping on Earth sets off a chain of events that renders the planet uninhabitable. The last survivors of humanity are the domed city of "Eden" on the far side of the Moon, which was established as a base for Terraforming Mars — the project is abandoned, and the city's leadership turns its focus inward. Eden becomes a self-supporting city-state able to support its population in comfortable, albeit micro-managed, lives.

Takeru, a rebellious boy sentenced to community service outside Eden's dome after an accident in a quasi-legal motor-vehicle race, witnesses something crash on the moon's surface. Among the wreckage, he finds a photograph of a young girl and a bunch of children, with a message written on the back saying that "We are safe. Is anybody out there?". Takeru becomes obsessed with the girl, and eventually realizes that the pictures were taken on Earth, despite Eden's ruling council insisting that the Earth is still a wasteland. Takeru decides to go to Earth himself, at any cost.