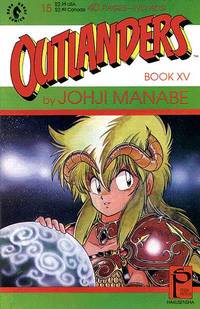 Outlanders (アウトランダーズ, Autorandāzu) is a Manga written by Johji Manabe, best described as a Space Opera with a strong dose of Science Fantasy, an Action Girlfriend and a whole heaping load of Fanservice. It tells the story of the alien Princess Kahm and Tokyo News Photographer Tetsuya Wakatsuki as they try to save the earth from the invading forces of the interstellar Santovasku Empire. Oh, and Kahm's father is the emperor. The Santovasku (referred to as Saint Evascureze in the OVA) use giant techno-organic spaceships, or "Biomechs," and they utilize both their advanced technology as well as their mastery of sorcery in their assault on Earth.

The manga was distributed by Dark Horse Comics in the United States prior to the expiration of their license on the property. The Dark Horse version was translated by Toren Smith of Studio Proteus. There is also an Outlanders OVA, produced by AIC on behalf of Tatsunoko Production and is not listed on Tatsunoko's web site. In 2005, Central Park Media released a remastered version of the OVA with new voice actors. A poll was conducted to select said actors, with fans selecting who they wished to voice the characters.

Manabe would later revisit the Outlanders universe with the one-shot manga, The Key of Graciale. Although it is not a direct prequel to his earlier Outlanders manga in terms of plot, Princess Kahm does return as heroine complete with her band of trusted servants in tow.

The OVA condenses roughly the first half of the series into a single self-contained episode less than an hour in length; all but the main story elements, in addition to most of the non-essential characters, are subsequently dispensed with.

This should not be confused with the Outlanders novel series by Mark Ellis, spun off from the Deathlands series of post-apocalyptic novels.