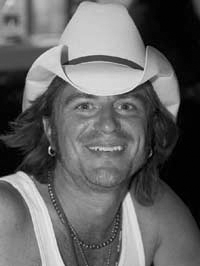 Scott McNeil, MIGHTY IS HE!
"Every time I have ever encountered fans anywhere, like any convention I've ever gone to, it still staggers me. It still sends me reeling back when people are just like, "We like what you do!" Well, you know, it's just like... Really? That is so cool!"
Advertisement:

Easily the most popular voice actor to work with The Ocean Group, Scott McNeil (born September 15, 1962 in Brisbane, Australia) is the Canadian equivalent to Steve Blum, Crispin Freeman and Patrick Seitz... IN AMERICA, and Banjo Ginga in Japan. He's usually cast as a big guy or a villain, but he also does some quirky and funny roles too. His most known roles are probably Dinobot, Waspinator, Silverbolt and Rattrap, Dr. Wily and Protoman, Piccolo in the early episodes, and Duo Maxwell. He reached Memetic Mutation status fairly quickly, faster than his U.S. counterparts.

Scott does a wide variety of voices in his work (again, see Beast Wars), but also tends to have two particular voices that are unmistakably his: a deep, gravelly, growling voice (ref. Piccolo, Koga), occasionally with snarl for particularly monstrous-looking roles (ref. Dinobot, Bale), or a snarky young, cocky-sounding voice (ref. Duo, Rattrap).

His favorite voice actors are Jim Cummings, Frank Welker, Rob Paulsen, Maurice LaMarche, Mel Blanc and Garry Chalk (who voiced Optimus on Beast Wars). His favorite characters out of those he's played are Duo and Hohenheim, because they resemble himself as a young man and an adult, respectively. His favorite show he ever worked on is Beast Wars, which he claims is one of the few shows he's done where he actively made it a point to turn on the TV and watch every episode when it aired. In fairness, it probably helps that he voiced half the cast. In particular, he considers Dinobot to be his favourite character; and he takes no shame in admitting that he has two characters in the Transformers Hall of Fame (Dinobot and Waspinator). His panels at conventions are also quite entertaining; from the various disgusting concoctions that attendants have Scott devour to his overall very casual demeanor, the man does great stand-up and his panels tend to become very comedic.