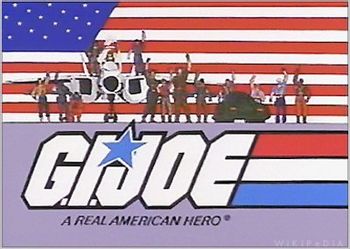 "He'll never give up, he's always there, fighting for freedom over land and air..."
"G.I. Joe is the code name for America's daring, highly-trained special mission force. Its purpose: to defend human freedom against Cobra, a ruthless terrorist organization determined to rule the world."
—Opening Narration for the Sunbow seasons.
Advertisement:

G.I. Joe was formed with the expressed purpose of stopping the terrorist group Cobra and the weapon distributors, mercenaries and scientists they hire. The Joes consists of military personnel from the Army, Navy, Air Force, Marines, and Coast Guard with a variety of skills and military specialities.

"And knowing is half the battle."