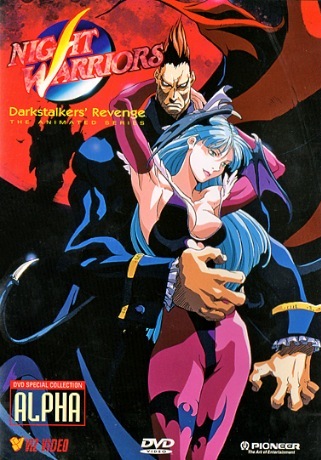 Night Warriors: Darkstalkers' Revenge (known in Japan as Vampire Hunter: The Animated Series) is a four-part OVA adaptation of the first two Darkstalkers video games, produced in 1997 by Madhouse and DR Movie.

The plot to some extent follows that of its namesake video game: an alien demon known as Pyron invades Earth, while in the midst the vampire Demitri Maximoff and succubus Morrigan Aensland duke it out to see who's the strongest, Felicia attempts to showcase her live music performance, Hsien-Ko and her sister Mei-Ling search for a way to free their mother's soul, Donovan Baine walks the earth fighting the forces of the dark with Anita by his side, and the long dormant Huitzil robots awaken and set their sights on exterminating humans and Darkstalkers alike.

The OVA was initially released in America on VHS and DVD by Viz Video and Pioneer, with an English dub by The Ocean Group, before going out of print.

The series was eventually re-released on DVD by Discotek Media years later and on March 14, 2022, just coincidentally a few weeks after the announcement of the series' comeback in Capcom Fighting Collection, Discotek announced that they'll be re-releasing a Blu-Ray version

, featuring restored video quality in both Japanese and English voice tracks, as well concept art galleries and original Japanese promotions as part of the extras.

This OVA contains examples of: