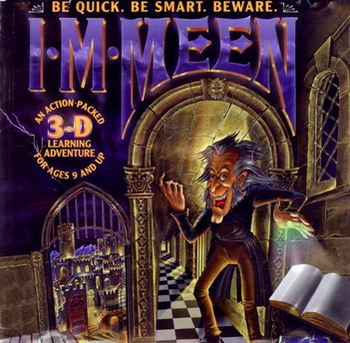 "Lost? Frightened? Confused? GOOD!
Nha ha ha ha ha ha ha!"
Oh look, what clever children! See them study, watch them learn?
How I HATE those goody-goodies, how they make my stomach turn!
I've got a little secret that'll really make them cry;
It's a nasty kind of magic, from a special kind of guy!
This book is made to order, but it isn't to be read:
When they open up this book, they're sucked inside instead,
To the most unpleasant place they've ever seen:
The Magic Labyrinth of I.M. Meen!
Very scary and confusing, destination of my choosing!
Magic Labyrinth of I.M. Meen!
— Opening theme song
Advertisement:

I.M. Meen is an educational kids' game released in 1995 where you are forced to fend off a meen-spirited man (voiced by the accomplished actor Peter Berkrot) and his guardians after he traps you in his magic maze. His assistant, Gnorris, helps you in secret along the way as you defeat the guardians, and eventually Meen himself.

Animated by Animation Magic, the same people behind the first two The Legend of Zelda CD-i Games and Hotel Mario, all of the game's cutscenes

Had a sequel called Chill Manor, which starred Meen's girlfriend/wife, Ophelia Chill, as she tries to literally rewrite history.

The game itself is essentially a First-Person Shooter (more specifically, a Doom clone without the BFG) with the only "educational" segments coming from locked doors that can be opened only by fixing grammar mistakes.

After getting his magic labyrinth ruined by the player, the once smug and self-assured I.M. Meen finally loses it and decides to fight the player himself.

After getting his magic labyrinth ruined by the player, the once smug and self-assured I.M. Meen finally loses it and decides to fight the player himself.