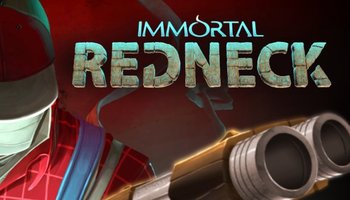 "Worst hangover ever. Guess we're not in Kansas anymore..."
— The Redneck
Advertisement:

Immortal Redneck is a Roguelike First-Person Shooter, developed by Spanish studio Crema. It was originally released on April 25, 2017 for PC through Steam here

What happens when a redneck goes go-karting in Egypt and runs afoul of some cursed ruins? Why, he gets mummified, thrown back in time, and forced to negotiate a Procedurally Generated pyramid, of course!

Gameplay is similar to other Rogueish FPSes of recent years, such as Tower of Guns or Ziggurat, with the added bonus of persistent progression of a type as seen in Rogue Legacy, where you can use money earned from your last run to purchase permanent upgrades such as new characters and maximum stat increases.