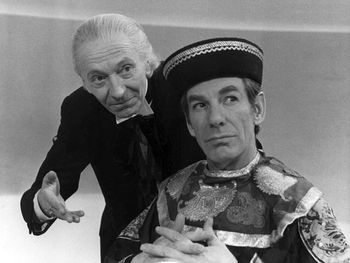 "You see? Did I not tell you the truth?" "Yes, Doctor, there is in fact a camera there. What of it?"
I'm bored. I love to play games but there's no-one to play against. The beings who call here have no minds, and so they become my toys. But you will become my perpetual opponent. We shall play endless games together, your brain against mine.
— The Toymaker
Advertisement:

The one with the N-word.

Episodes: "The Celestial Toyroom", "The Hall of Dolls", "The Dancing Floor", "The Final Test".

The TARDIS arrives in the domain of the eponymous Toymaker, an immortal being who forces them to play deadly games. The Doctor plays the Trilogic Game, which neither believes the others would be capable of solving for some reason. Meanwhile, Steven and Dodo are given more childlike pursuits with incredibly deadly results, eventually playing a dice-based board game where they have to hop from square to square over an electrified floor while playing against a cheating man-child. The Toymaker, over the episodes, grows frustrated with the Doctor being... well... himself and begins to take parts of the Doctor away, making taunts to him. The Doctor is finally left down to a single hand, with no way to speak or even do much but play the Trilogic game.Of course, the Toymaker eventually returns the Doctor to normal, otherwise it'd be hard to explain the future stories, wouldn't it?

Steven and Dodo, in their game of increasingly-deadly (and long) board games, barely win out as the devious manchild essentially commits suicide-by-stupidity. They rescue the TARDIS, the goal square of their little game, and the Doctor gets ever-closer to finishing off his game. Eventually, the Trilogic Game comes down to a dilemma: the Doctor can win by moving the last piece on the board, but if he does so the Toymaker's realm will vanish entirely. This means taking himself, Dodo and Steven with it while leaving the Toymaker free to build another realm and jerk around with more people. The Toymaker hopes that the Doctor will stay and play games as an equal mind to his own.

The Doctor wins by making his final move from inside the TARDIS through verbal commands that imitate the Toymaker himself. As they escape, the trio celebrate their win by all sharing a grin. The Doctor then whips out a bag of sweets and has a piece, but is left moaning in pain when he bites down on the sweet...

Episodes 1 to 3 of this story are among the 97 missing episodes of 60s Doctor Who. The fourth episode exists, and was released on the "Lost in Time" DVD set. However, there is a full novelisation of the adventure, and as with all other missing episodes audio recordings of the original broadcasts survive.