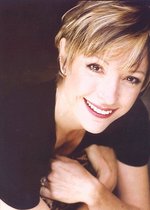 "I have deep feelings about Star Trek. I feel that it's able to present archetypes that are important story telling tools. And we need story telling."
Advertisement:

Nana Visitor (born Nana Tucker, July 26, 1957) is an American television and film actress most famous for her role as fiery, outspoken Kira Nerys on Star Trek: Deep Space Nine and as compassionate, hardworking Jean Ritter on ABC Family's Wildfire. She has also guest starred in various other shows, including Battlestar Galactica (2003) and Castle. Her film roles include Pamela Voorhees in Friday the 13th (2009) reboot.

Visitor is notable for two things: she is one of the standout examples of When She Smiles and she is fully capable of breaking a viewer's heart with her face alone. She excels at portraying characters that combine fiery independence and heartbreaking vulnerability and quite possibly has the most eloquent eyes in Hollywood.

During the run of Deep Space Nine, she became involved with co-star Alexander Siddig. When she got pregnant by Siddig, the writers incorporated her pregnancy into the show, beginning with "Body Parts" and lasting until "The Begotten", after having given birth to their son during the production of "The Assignment". The two got married in 1997, but divorced four years later. Visitor has a son from a previous marriage too.