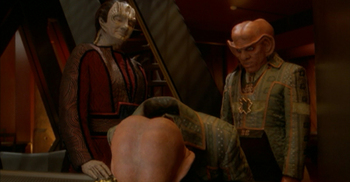 Quark returns from Ferenginar having been diagnosed with a fatal disease. Desperate to clear his debts before his death so he can ascend to the Ferengi version of Heaven, he makes a deal to sell his corpse, delivery in six days (the time limit the doctor gave him).

Unfortunately for Quark, the enormous bid for his body that he accepted was from his old enemy Brunt, FCA. Brunt despises Quark for his "softness," and has trapped him in a catch-22. When Quark discovers that he isn't dying after all, he's left with an impossible choice: either break the contract, becoming an outcast from Ferengi society with all his assets and the assets of his family seized, or find a way to die within the six days so that his body can be delivered accordingly. As a proud Ferengi, Quark decides he would rather die than accept exile, and begins making arrangements to have Garak execute him.

Quark then has a vision of a visit to the Celestial Treasury, where his imagination supplies images of Brunt and the first Grand Nagus. The two argue, with Brunt telling him to go through with his plan and the Nagus (who Quark has imagined looking uncannily like Rom) telling him that his life is more important than any rules.

In the end, Quark decides to break the contract. Brunt declares him persona non grata on Ferenginar, and hauls off the entire contents of Quark's Bar as an opening payment. Quark collapses in the empty room, deep in depression over his complete lack of assets. Quark's Federation and Bajoran friends then arrive, bringing furniture and equipment from elsewhere in the station. Rom comments that with so many friends, Quark isn't without assets after all.

Meanwhile, Bashir, Kira, and Keiko O'Brien arrive home from an away mission after an accident has resulted in Keiko becoming badly injured. She'll recover, but the baby was in jeopardy; with no other options, Bashir transferred the fetus into Kira. The process is not reversible, so Kira will have to carry the child to term.