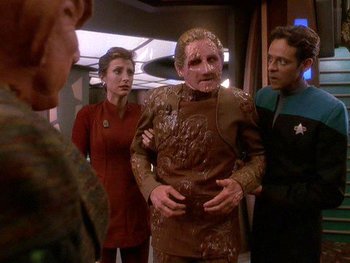 Uh, Odo? You sure you don't need your old bucket?
Advertisement:

Garak calls Odo to his tailor shop, but instead of reporting a crime, he introduces Odo to an attractive Bajoran woman, Chalan Aroya, who hits on Odo shamelessly. Odo is flustered by the attention, and things get even worse when he's suddenly wracked by pain and starts to liquify involuntarily. In sick bay, Bashir states that Odo's composition is in wild flux, so he'll need to stay in sick bay and avoid moving around while Bashir studies his condition. Odo breaks out to confront some criminals but suffers a second fit. His appearance is starting to deteriorate as he finds it harder to maintain a solid state. Only Odo's people, the Founders, will know what to do with him.

Sisko decides to pack Odo up on the Defiant and parley with the Founders, hoping that they will help one of their own. Garak asks to join, and Sisko agrees if Garak will provide a distraction to Odo. The alleged Cardassian spy spins various tales of his past to Odo during the voyage.

While this is going on, a dispute between the Federation and the Klingon Empire over some Federation colonies bordering Klingon space has brought the two nations to the brink of war. Less importantly, O'Brien is finding it difficult to live with both his wife and Kira, whom he suspects are gossiping about him behind his back.

In Dominion space, the Defiant is forcibly boarded by the nameless Female Changeling and some Jem'Hadar guards. She stabilizes Odo's condition but says that he needs to return to their homeworld to join the Great Link and receive judgment for killing one of their own. Odo realizes that the Founders caused his current state so that they could force him back home. Before they leave, Garak corners the Female Changeling and asks if there were any Cardassian survivors from the recent attack. She coldly responds that they are all dead, as are all Cardassians for ever attacking the Dominion.

The Jem'Hadar navigate the ship to the Founders' homeworld with computer jammers in place to prevent the Federation from tracking where they are. Sisko and Bashir insist on beaming down to the surface with Odo. He wades into a great ocean of changelings and joins the Great Link. During the deliberation, Worf catches Garak trying to bring the ship's weapons back online so that he can destroy the Changelings' homeworld and end the war in one brutal stroke, but Worf stops him, as that would be murder. After some time, Odo washes back ashore with a fully human body. In Sick Bay, Bashir confirms that Odo is now biologically identical to a human except his face. Odo confirms that his judgment was to become a solid, and his face is a reminder of what he's lost.

Odo is brought back to the station, where he's fitted for a real uniform and contemplates the prospect of eating for the first time. Sisko suggests that he take some time to acclimate to his new body, but Odo wants to get back to work, as it's the only thing he has left. On the Promenade, Odo catches an announcement from Gowron declaring that the Klingons are mobilizing into the disputed colonies and will attack any Federation or Bajoran presence they find. Odo suddenly realizes that one of the things the Founders were trying to keep from him in the Great Link is the fact that Gowron is actually a Changeling.