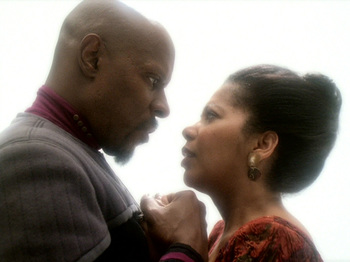 "Don't worry, Kasidy, I managed to talk the Prophets out of keeping me with them forever. See you in the relaunch books!"
"All right, people, what do you say we end this war?"
— Sisko, Leaning on the Fourth Wall
Advertisement:

Following a series of key victories, the Federation and their allies have turned the tide of the war with the Dominion in their favor. Tensions are running high among the crew of the Defiant as Bashir and Ezri worry about surviving to the end to pursue their relationship while O'Brien prepares to return to Earth after the war is over to pursue a teaching career at Starfleet Academy, but finds himself fretting over telling Bashir. All the while, Captain Sisko tends to his wife Kasidy as she contends with morning sickness whilst Kira and Garak continue to work with Damar in subverting the Dominion's hold on Cardassia from within their own territory.

With the Dominion retreating to Cardassia to regroup, the time has at last come for the final battle in the war: rather than wait for the Dominion to rebuild their ranks, the Federation, Klingons, and Romulans agree that the time is ripe for a final push to crush the Dominion once and for all.

The Federation and their allies launch their combined fleet and make their way to Cardassia as Sisko has another vision from the Prophets, with Sarah telling him his task was nearly complete, but the end of the journey he undertook lies not before him, but behind him. Meanwhile, on Bajor, Dukat regains his eyesight after the Pah-wraiths had blinded him for attempting to read the Book of the Kosst Amojan and meets with Kai Winn to finally undertake their own journey to the Fire Caves to release the Pah-wraiths and destroy the Prophets once and for all.

With the Dominion's defenses spread too thin, the Federation prepares to engage them while the Cardassian resistance sabotages power to the Capitol, disrupting communications and drawing the Female Changeling's ire. In response to the resistance's acts of sabotage, Weyoun orders the destruction of Lakarian City as punishment.

As Garak prepares to aid Damar in raiding the Capitol, Dominion soldiers kill his old friend Mila and raid the resistance's base in Garak's old basement, capturing Kira, Garak, and Damar. Meanwhile, throughout the Cardassia system, Dominion forces engage the Federation's fleet. It is a hard fight as Breen warships assail the Defiant and the Romulan flagship is destroyed, with O'Brien finally working up the nerve to tell Bashir he would be leaving for Earth after the war.

Back on Cardassia, Kira, Garak, and Damar are about to be executed by the Jem'Hadar when Cardassian turncoats shoot the would-be executioners and save them from certain death. Similarly, Cardassian warships begin to fire upon the Breen and Jem'Hadar, saving the Defiant and giving the Federation fleet the chance it needs to continue their push to Cardassia. Once communications in the Cardassian Capitol are restored, the Founder is dismayed to learn of the Cardassian ships' betrayal. At her wit's end with the Cardassians, she orders the Jem'Hadar to execute her loyal Legate Broca, then orders Weyoun to carry out the immediate genocide of the Cardassians.

With the Dominion fleet now bombarding Cardassian cities, Kira and a revenge-driven Garak help Damar make the final push into the Dominion's headquarters at the Capitol. The entrance is too heavily protected, but the resistance manages to make their way in when the entrance opens for Jem'Hadar soldiers preparing to carry out Broca's execution. Damar dies in the ensuing firefight, but Kira and Garak manage to fight their way in.

As the Federation and their allies close in on Cardassia Prime and prepare for one final strike to destroy the Dominion fleet, Kira and Garak make their way to the nerve center of the Dominion command. Garak kills Weyoun: with the Vorta cloning facilities destroyed, Weyoun is now finished once and for all as the Founder is captured, but she refuses to surrender. When Kira reports the Founder's deteriorating status to Sisko, Odo beams himself to the Dominion base to try to talk to her. The Founder believes the Federation would invade the Gamma Quadrant, but Odo assures her that they wouldn't and offers to cure her. Garak is suspicious of Odo's offer to the Founder, but Kira convinces him to stay his hand as Odo and the Founder link. With the morphogenic disease that ailed her cured, and Odo's experiences with the people of Deep Space 9 shared with the cure, the Founder finally agrees to surrender, calling off the Breen and Jem'Hadar fleets and ending the war. Furthermore, she would remain in the Alpha Quadrant to answer for her actions during the war. As such, the task of curing the Great Link would fall to Odo.

With the war finally over, the Founder signs the instruments of surrender as Garak decides to stay behind on Cardassia to rebuild and Worf accepts an offer by Admiral Ross and Chancellor Martok to become the Federation's ambassador to the Klingon Empire. In addition, with the task of curing the Great Link and teaching his people to trust others being a long and hard one, Odo asks Kira to come with him to the Changelings' homeworld to see him off.

Afterwards, the crew of Deep Space 9 hold a victory party at Vic's holosuite club. Unfortunately for Sisko, there is no time to rest: while the final stages of the Dominion War were underway, Dukat and Winn traveled to the Fire Caves of Bajor and released the Pah-wraiths. Afterwards, Winn offers Dukat a toast to celebrate their impending victory, only for Dukat to realise after he drank his toast that Winn had poisoned the wine, killing him as a sacrifice to the Pah-wraiths. When Winn calls out to the Pah-wraiths to grant her their power, however, the wicked spirits completely rebuke her and instead give their power to Dukat, resurrecting him and restoring his Cardassian appearance.

Sisko, sensing that something was amiss on Bajor and finally understanding what it is the Prophets want of him, immediately leaves for the Bajoran Fire Caves and confronts Dukat. With the Pah-wraiths granting him their godlike power, Dukat is easily able to overpower Sisko. Winn, after realizing what she had wrought, prepares to throw the Book of the Kosst Amojan into the flames of the Fire Caves, only for Dukat to whisk it from her grasp.

"Emissary, the book!" Winn cries out before Dukat envelops her body in flames and destroys her.

While Dukat is distracted, Sisko takes the chance to tackle him, throwing them both into the Fire Caves. The flames consume the book and destroy it, along with Dukat's body, as the Prophets rescue Sisko. Sarah approaches him once more, informing him that he had finally fulfilled his task as the Prophets' emissary: the Pah-wraiths were once again sealed, along with Dukat, never to return. Unfortunately for Sisko, the Prophets were not done with him. The real work is only just beginning...

As Sisko's family attempt to find him, Kasidy receives a vision from Benjamin. The two tearfully reunite before Benjamin explains that he had to join the Prophets, and there was no way to know for certain when he could return. Nonetheless, he promises to return to her in due time.

With the war finally ended and Bajor at peace, the time has come at last for some of the station's most notable residents to take their leave. Miles O'Brien reminisces about the times he shared with Julian Bashir, the young doctor whom he first thought an annoyance, but would in time become his best friend. Worf thinks back on his life after the Enterprise, a time of great change for himself and the Klingon Empire as he prepares to return to his homeworld with his sworn brother, Martok. Odo thinks on the life and love he shared with Kira Nerys as he leaves his old bucket for her as a memento. Quark has fond memories of the interesting goings-on at his bar since the Federation came to the station. And Jake Sisko looks back with fond feelings on the seven years he lived on the station with his father.

At last, Odo decides to take his leave. He tries to slip away unnoticed by the station's inhabitants, not being fond of long goodbyes, but is approached one last time by his old rival Quark. Quark tries to coax Odo into saying kind things about him before he leaves, to which Odo can do naught but harrumph and walk away. Even though Odo would never say it, Quark knows for a fact that the constable respected him and raises a toast to his friend.

Odo and Kira make their way to the Changeling homeworld, where the Great Link had become green and sickly with the morphogenic plague. Odo says his farewells to Kira before kissing her and donning a tuxedo just for her before walking into the Great Link and merging with it, the green fluid that composed his race beginning to return to its healthy golden color.

Life on the station returns to normal, with Kira, now the commander of the station, keeping Quark on a tight leash. As Quark muses that "The more things change, the more they stay the same", Kira walks onto the Promenade and sees Jake looking out at the wormhole. She joins him and gazes out to the wormhole, the two of them comfortable in the knowledge that within the Celestial Temple is Captain Benjamin Lafayette Sisko: father, husband, friend, Emissary, and hero to the Federation and the people of Bajor...

Quark: It's like I said. The more things change, the more they stay the same.