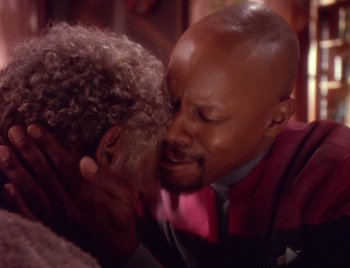 "I've been dragging you through time like an anchor. And now it's time to cut you loose."
"To my father,
who's coming home."
— Jake Sisko
Advertisement:

Bring tissues for this one.

The first shot of the episode gives us an old man, injecting himself with a hypospray, just prior to a young woman (Rachel Robinson) knocking at his door. So, what was in the hypospray?... Oh: the young woman, Melanie, claims that the old man (Tony Todd) is Jake Sisko (Cirroc Lofton). ...What? Oh: Melanie claims that Jake is her favorite author, and always wondered why he stopped writing after Anslem and Collected Stories were published. She has tracked him down, and Jake decides that tonight, of all nights, is the time to tell the story of why he stopped telling stories: "My father died."

After the credits, we begin one of the episode's many Flashbacks: to the USS Defiant in the "present day" of DS9 (i.e., Lofton as Jake), with the elder Jake narrating. Though Jake was nose-deep in the writing of Anslem at the time, his father convinced him to come out to the Bajoran Wormhole to watch it undergo an "inversion," a natural wonder that only happens every 50 years or so.

Advertisement:
Sisko: I'm no writer, but if I were, it seems to me I'd wanna poke my head up every once in a while and take a look around, see what's going on. It's life, Jake. You can miss it if you don't open your eyes.

Unfortunately, most natural wonders involve the Star Trek Shake, which rattles something loose in the Defiant's warp core. Disobeying orders, Jake follows Sisko down to Engineering, and father and son successfully get the core stabilized before it explodes. All is well, and Sisko hands back the bit of Applied Phlebotinum Jake gave him... as a bolt of energy slants out of the warp core and vaporizes him.

Melanie: I'm not sure I could ever get over losing somebody like that, right in front of my eyes.
Old Jake: People do. Time passes, and they realize that the person they lost is really gone. And they heal.
Melanie: Is that what happened to you?
Old Jake: No. I suppose not.
Advertisement:

Jake, now totally orphaned, rattles around DS9; everybody is nice to him, but that doesn't help a whole lot. Even worse, his father appears to him while he sleeps—not as a ghost or a nightmare, but seemingly whole and disoriented, before immediately disappearing again. The first time Jake thinks it was a dream, but the second he is able to rush Sisko down to Sickbay, where Dax and Bashir confirm that this is the real Sisko, somehow Unstuck in Time. Unfortunately they are not able to re-stick him before he disappears again. Even worse, between the loss of The Emissary and the increased Klingon aggression showcased in the previous episode, the Bajorans have lost faith in The Federation. Jake and all other Starfleet personnel are obliged to withdraw from the station. While on Earth, Jake (now played by Tony Todd in flashbacks as well as in "the present") settles down in Louisiana with his grandfather, marries a Bajoran painter, Korena, and appears ready to put everything behind him. ...Until Sisko drops in again, drawing Jake's attention away from his life and back to that of his father's.

Jake goes back to school for a degree in temporal mechanics, abandoning his writing career and his wife to do so, and deduces that his best opportunity to get his father back will be to take the old Defiant back to the wormhole as it undergoes another inversion. Aided by Captain Nog and the now-elderly Bashir and Dax, he sets up a device that will hopefully pull Sisko back into the timestream. Instead, it pulls him out of time for a short chat. Sisko begs Jake to move on and live his life, to put the tragedy behind him, but to no avail.

This brings us back to "the present," where the elderly Jake and the young Melanie sit in that house in Louisiana. Jake explains that he has finally worked out the nature of the connection between himself and his father: Jake acts like an anchor, continuing to drag his father forward through time. If Jake were to somehow sever that connection when his father is present, it should act as a giant Reset Button, sending his father back to the moment of the accident. But how is he going to mash the... Is that what was in the hypospray?? Is that why Jake chose today of all days to tell this story? Evidently so. He gives Melanie a copy of the work of fiction he was toiling over before she arrived, and some parting words of wisdom:

Old Jake: While you're studying my stories, poke your head up every once in a while. Take a look around. See what's going on. It's life, Melanie.
Melanie: And you can miss it if you don't open your eyes.

Jake settles himself in to wait, eventually drowsing; when he wakes up, Sisko is there. Sisko clearly plans to make the best of what little time he has with his son, but Jake has even less.

Courtesy of his son's warning, Sisko is this time prepared. He makes a Diving Save, shielding both him and Jake from the blast of energy. Jake is astonished: how did Sisko know that was going to happen? But Sisko is more preoccupied with his son, who gave up his life to save them both.