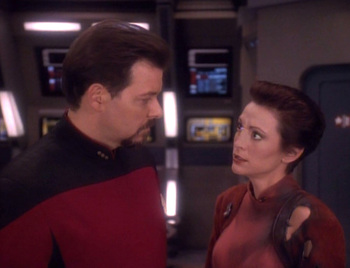 Riker has some intense tête-à-tête with Kira. Don't get too excited, it's not that Riker.
Looks like you've got your evening all planned. Hope you've got room for the unexpected.
— Riker
Advertisement:

Kira is getting run ragged by work order after work order around the station. It finally comes to a head when she snaps at Bashir, who needs a runabout to transport medical supplies. The good doctor notes how overworked and stressed she is, and he forces her to take some time off.

With Kira forcibly parked at Quark's, Bashir orders her to relax with various stress-relieving tools. And if she doesn't use two of them, she's gonna come back tomorrow. Well, someone offers to assist her in relaxing: Will Riker.

The bearded one is on his own vacation after Dr. Crusher finally forced him to take some time off. Running into Kira, he asks her to show him the new U.S.S. Defiant. After a brief bit of harshness between Riker and O'Brien, Kira powers the ship up . . . and instantly gets phasered by Riker. Faking a plasma conduit malfunction, Riker makes off with the ship.

Two people beam onboard, and "Riker" removes his fake sideburns. This is Thomas Riker, the accidental copy from "Second Chances".

And the bad news doesn't stop there. With Dukat onboard the station, Odo delivers the info that Thomas Riker is a part of the Maquis. And he's in possession of a lethal new battleship. It's not hard to guess where they're heading with it. Sisko and Dukat reluctantly join forces and head for Cardassia Prime.

As Dukat and Sisko monitor the situation with an Obsidian Order observer in the room, the Defiant attacks Outpost 61. But Sisko notices they made no attempt to cloak and that the warp signature is off. It's a decoy. The actual Defiant uncloaks and destroys Outpost 47 before heading straight into Cardassian territory.

As the Defiant continues to carve a swath of destruction, Sisko again notices something odd: The attacks have forced the Cardassian fleet to leave the seemingly unimportant Orias system undefended. Dukat orders a ship there but is stopped by the observer. The Orias system is under Obsidian Order protection.

The Defiant is headed for the system with an entire Cardassian fleet on their tail. Things get odd when they arrive. Three Cardassian ships move from the planet to defend it. Those aren't ships under Dukat's command. He's outraged to learn that they're under the command of the Obsidian Order, who are forbidden to have any military power.

As Kira tries talking Thomas down, Sisko and Dukat work out a deal: Sisko offers him the Defiant logs, which contain some valuable info on this mysterious sector. In exchange, Sisko wants his ship and the Maquis returned to Federation space for trial.

Dukat won't accept that until Sisko makes a concession: Sisko will give him the logs and Riker. Sisko agrees so long as Thomas isn't sentenced to death, as the Cardassians are so apt to do.

Thankfully, Thomas still has some shred of his other self's honor. To save his crew, he accepts a life sentence in the Lazon II labor camp. And he gives Kira a parting kiss before being beamed away.