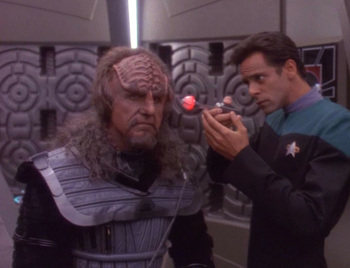 No wonder Odo's so glum; he used to be able to do this himself.
"BRAG ALL YOU WANT, BUT DON'T GET BETWEEN ME AND THE BLOODWINE!"
— Captain Sisko

With war heating up between the Federation and the Klingon Empire, Sisko, Worf, O'Brien, and Odo undertake a risky mission to the heart of Klingon space to expose Gowron as a changeling.