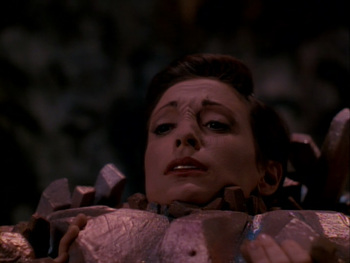 "Come on, Odo, it's pretty ridiculous, don't you think? The two of us being outsmarted... by a chunk of crystal?"
Odo and Kira are returning to the station after attending a security conference. Kira discusses security measures over the recent Bajoran-Cardassian peace treaty, but Odo is testy because Kira turned down a dinner request without consulting him. Their awkward conversation is interrupted when they stumble across a Maquis attack in progress, which threatens the treaty. They give chase to an unstable moon that is impenetrable to sensors, so they beam down to resume the chase on foot.
Advertisement:

On the station, Nog receives an audience with Sisko and formally presents him with a sack of latinum. He's completed his Attainment Ceremony and is now a man in need of a mentor. He wants Sisko to be that mentor so that he can apply to Starfleet Academy. Sisko is nonplussed and only agrees to think about it.

Back on the unstable moon, Odo and Kira run after the Maquis through a network of caves, but seismic activity makes falling rocks a perpetual hazard. They separate, and Kira calls for Odo's help. She's gotten her foot stuck in a crystal of some kind. It seems harmless at first, but they quickly realize that no amount of force seems to dislodge it, and it's growing. Odo tries to beam Kira out of it, but the moon's atmosphere makes it impossible. He can't even send a message to the station. Instead, he has to send out a probe that will take at least two days to reach the station. Kira doesn't have that long.

On the station, Nog and Rom are getting bullied by Quark to fix the replicators that broke due to his own negligence. When Nog learns that Jake told Sisko that his desire to join Starfleet was a joke, he becomes irate and insists that he was serious. Nog bumps into Sisko and reiterates his interest, but Sisko is still dubious, noting Nog's mediocre grades and brushes with security. Nog begs for an opportunity to prove himself, so Sisko assigns him to inventory a cargo hold with no one looking over his shoulder as a test. Dax gives a glowing report of Nog's inventory, saying that he finished in record time and found things even the previous report missed. But there still remains the mystery of why Nog wants to join Starfleet.

On the moon, Odo rejoins Kira in the aftermath of a phaser fight with the mysterious Maquis. He tells her the bad news, but says that he hasn't given up. He's going to try to use an ultrasonic oscillator and find a frequency that will shatter the crystal. To distract her, Odo tells Kira about his upcoming plans to go to the holosuites with O'Brien for some kayaking, something he actually enjoys even though it's quite hazardous. When another quake rocks the area, he transforms into a canopy to shield Kira from falling rocks.

The crystal has almost engulfed Kira, and the ultrasonic generator has failed to work for some unknown reason. Kira realizes that she's doomed and begs Odo to keep talking to ease her mind, suggesting that he explain the origin of his name. Odo says that the original Cardassian who discovered him described him as an "unknown sample," but this got transcribed as Odo'Ital, meaning "nothing." When the Bajorans took over, they named him Odo Ital as a joke, which ultimately got shortened to Odo. Odo always took it as a reminder that he was "nothing," but now that he has Kira... and the rest of his friends on the station, he feels like himself.

Sisko summons Nog and tells him that he is denying Nog's request, saying he can't risk Nog screwing up and damaging his reputation. Nog again gets irate and begs Sisko to reconsider, but Sisko demands that Nog explain why he wants this so much. Nog finally breaks down and admits that he doesn't want to end up like his father. Rom is a genius engineer but never pursued it because Ferengi culture values profit over all. Like his father, Nog has no lobes for business, so he want to become great in some other way. Sisko agrees to help Nog join Starfleet, and Nog assures him that he's ready to do whatever it takes.

On the moon, Odo refuses to abandon Kira even after she orders him to leave. She demands to know why, and he finally admits that he loves her. Kira professes her love for Odo as well. But Odo starts to get suspicious. After a long period of silence, Odo puts it all together. He states that the phaser fire from Kira's offscreen firefight does not match her account of events. Further, the Kira he knows has never once displayed a romantic interest in him. He asks who Kira really is.

Before his eyes, Kira transforms into the Female Changeling he's already met. She explains that this whole episode was a test to see why Odo was so committed to siding with the humanoids. She assures him that Kira is nearby and unharmed. Odo demands that she hand over Kira. As no Changeling has never harmed another, Odo is allowed to leave. He retrieves Kira from a stasis pod, and they return to the station. When Kira asks what tipped Odo off that the Changeling wasn't her, Odo will only say that it was a "slip of the tongue" and dismisses it.

Quark has learned of Nog's intention to join Starfleet and forbids it. Rom finally stands up for himself by stating that decisions concerning Nog are his responsibility. He proudly congratulates Nog on his goal to become the first Ferengi in Starfleet. Nog embraces his father, saying, "Like father, like son!"