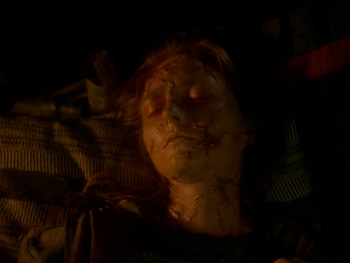 Ohhh, this one's depressing.
The episode starts out with Kira, O'Brien, Odo, and Worf confronting Quark about illegal advertisements that were inserted into Deep Space Nine's computers. The most egregious would be replacing all the cups in the replicators on both the station and the Defiant with mugs advertising Quark's bar, with a jingle from Quark's bar playing every time someone took a drink. Kira delivers an Implied Death Threat to Quark: she is about to leave for the Gamma Quadrant on a mission with Dax and Bashir, and if these advertisements are not removed from the station and the Defiant, then there will be some "fun" going on at Quark's.
Advertisement:

While on the mission in the Delta Quadrant, they receive an automated distress signal from a planet on the edge of Dominion space. When they beam down to the planet to investigate, they find a ruined city and people with bluish lesions on their faces. They then encounter a woman with red lesions who collapses in agony in front of them. As she dies, a man explains to Dax and Bashir that this civilization is infected with something known as "the blight". The Starfleet officers are taken to a clinic where a local doctor, Trevean, explains the origins of the blight. This civilization, referred to as the Teplans, were once a very advanced civilization. But when the Dominion were expanding to the area and attempted to subjugate them, the Teplans attempted to resist. It ended poorly: not only did the Jem'Hadar destroy most of the major population centres, the Dominion infected the planet with a virus which is now known as the Blight. It progressed so rapidly and infected everyone to the point that all Teplans now have it, even from birth as the virus is transmitted in-utero. Born with the blue lesions on their faces, when these lesions turn red, it means that the disease has "quickened" in them meaning that they have reached the stage where the disease will ultimately kill them in days. Trevean is revealed to be a palliative-care doctor of sorts: when people quicken, Trevean administers a blend of herbs that quickly kill those who have quickened so that they do not suffer the horrible agony that is prevalent in the disease's terminal stage. The distress signal that Dax had discovered is from an automated beacon from 200 years ago, from when the Dominion first invaded.

Kira has been monitoring a Jem'Hadar patrol in the area and notes that they need to leave as soon as possible. However, Bashir feels that he can do something to help the Teplan people. To that end, Kira agrees to hide in a nearby nebula for a week, while Dax and Bashir try to see if they can do something for the Teplans. With the help of a local pregnant woman named Ekoria, Bashir sets up shop at her residence and sets out to do his work. They immediately isolate the virus that causes the Blight and Bashir synthesizes an antigen that he uses on a group of volunteers eager to see Bashir at work, including Ekoria. Trevean warns Bashir of prior people who have promised cures to Teplans only to deliver nothing. Bashir refuses to promise anything but Trevean warns the group of volunteers that they will require Trevean's services soon enough.

Trevean soon proves to be correct: the group of Teplans start to suffer horribly while lesions develop suddenly in front of Bashir's eyes while during routine scans. Bashir realizes that the electromagnetic fields from his instruments are allowing the disease to progress rapidly and it dawns on both Dax and Bashir that not only the disease was designed to be fatal, but it forced the Teplan civilization to abandon technology just to survive. Now aware of the group of dying volunteers, Trevean administers toxic cocktails to all affected patients to stop their suffering. Only Ekoria remains of the group of volunteers, the rest now dead.

Bashir is despondent: he was so confident that he would find a cure so quickly but didn't realize that the Dominion had engineered the virus in this fashion to make it so difficult to even eliminate, much less treat. Just as he is about to give up, Dax tells him that just because Bashir couldn't find a cure, does not mean that the Blight is incurable. When Kira returns to the planet, Bashir resolves to stay behind and will send a signal to Deep Space Nine when he is ready to be picked up.

Using primitive tools available, Bashir resolves to care for his only remaining patient: the pregnant Ekoria, who is now in the initial stages of Quickening. He resolves to help her to at least ensure that her child is born. Trevean meanwhile wishes for Ekoria to seek his "treatment", noting that her child is likely infected with the blight in-utero and that death would be preferrable to living in suffering, but Ekoria refuses. A few weeks later, Bashir induces labor on Ekoria and she delivers a baby boy without any of the blue lesions of the Blight. Bashir realizes that the antigen he has created is actually a vaccine that helped Ekoria's son fight off the Blight. Ekoria, finally realizing that her son will not suffer from the disease, dies in exhaustion.

Trevean and his group of healers are astonished as to what Bashir was able to accomplish. Bashir agrees to help Trevean to manufacture the vaccine and Trevean himself makes it his task to ensure the vaccine is administered to every pregnant woman on the planet. The Teplans begin to celebrate the first child born free of the Blight but Bashir stands away from the Teplans, not feeling like celebrating. Back on the station, Sisko gives Bashir his commendations for helping the Teplan people, but Bashir does not feel the accolades are deserved. The next generation of Teplans may be able to be born free of the Blight, but the people still suffering will continue to die. As the episode ends, Bashir runs his computer through simulations of the virus's progression trying to see if there is something he missed in his quest to help the Teplans fight the horrible disease.