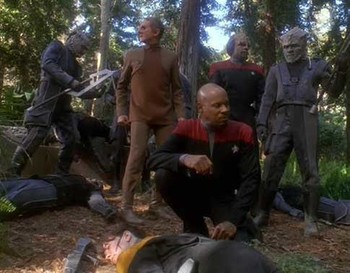 Don't get too used to this.
When a renegade faction of Jem'Hadar discover a powerful Iconian gateway, the Federation crew have to join forces with the Dominion to stop them.

This episode marks the first appearance of Weyoun, and also the last appearance of this particular Weyoun. The Vorta only became a clone race because the showrunners loved Jeffrey Combs' performance in this episode.