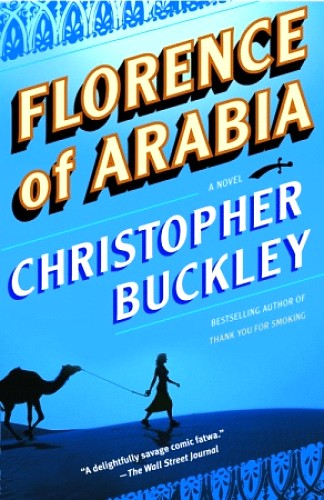 A 2004 satire by Christopher Buckley about women's rights in the Middle-East, specifically the extremely conservative (fictional) country of Wasabi (based on Saudi Arabia).

One evening, Nezrah, the fourth wife of Prince Bawad, nephew to the Sheik of Wassabia, crashes her car drunk and asks for asylum. The woman she asks asylum from is Florence Farfaletti, deputy to the deputy assistant secretary for Near East Affairs. However, Wassabia supplies one-third of all the US oil, so Nezrah is given back to Prince Bawad, shipped home, and then summarily executed.

Florence, appalled, submits a report about empowering women in the Middle-East. Then, after it's not quite taken seriously, she quits...and gets recruited by Uncle Sam, a mysterious man who can get whatever Florence needs for her goal.

What she needs is this: one slimey PR agent, one handsome and CIA-approved killer, and her best friend, a gay and neurotic bureaucrat. Her weapon: tv shows.

She and her team of ragtag misfits set up in Matar (pronounced "Mutter"), the slightly more liberal country that separates Wassabia from the coastline and then establishes TVMatar, a television station with programming for women. The programming includes: The Thousand and One Mornings, a daytime talk show featuring self-defense tips, a soap opera about a royal family striking similar to the Matar royal family, and a sitcom about a group of religious police dubbed Friends from Hell.

What she gets is: a fatwa issued against the entire station and interference from the French. Of course.

Now being made into a movie with Charlize Theron as Florence.