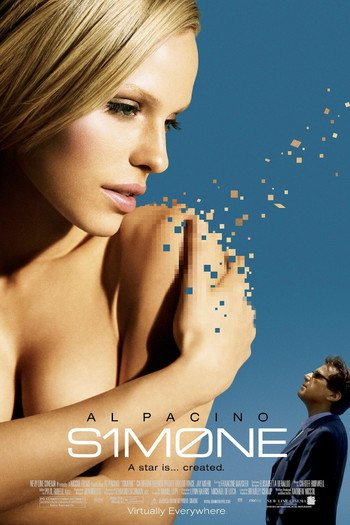 When the main star of film director Viktor Taransky (Pacino)'s latest film walks over "creative differences", Taransky is left with two options: scrap the movie altogether, or find a replacement. Unfortunately, given Taransky's plummeting career and the esoteric nature of the film itself there are no actresses who are willing to take the part.

There is one last, desperate thing he could try: a recently deceased acquaintance left him a computer program on a disk, and he can use that program to digitally create a replacement. It works: the film is a hit, and the "actress" is a runaway success, so Taransky markets her as a real person - giving webcam and phone interviews, "casting" her in his later films, and even performing a music concert as her, but things start to get out of hand. A pair of journalists who are trying to get a lead on the famously reclusive "Simone" are starting to suspect something is wrong, and Taransky himself is beginning to feel overshadowed by his creation.

The film is mainly remembered today for featuring an early film performance by Evan Rachel Wood (as Viktor's daughter) and for its publicity campaign that claimed Simone was a CG-animated actress, much like in the movie (in real life, of course, this wasn't the case). Also in the cast are Catherine Keener, Winona Ryder, Pruitt Taylor Vince, Jay Mohr, and Jason Schwartzman.