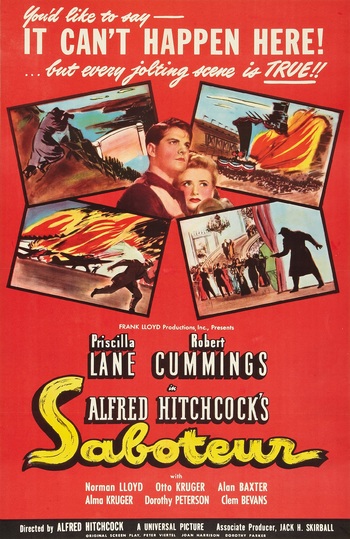 Saboteur is a 1942 wartime thriller directed by Alfred Hitchcock. It was his first film to be made with an all-American cast.

The protagonist is Barry Kane (Robert Cummings), who works at an airplane factory in California when a friend of his is killed in an act of sabotage. While the law thinks he is responsible, Kane goes on a cross-country hunt for the real saboteur, a man named Fry (Norman Lloyd). While on the run, Kane—in true Hitchcock fashion—gets involved with a sexy blonde named Patricia Martin (Priscilla Lane), who initially distrusts him but gradually comes to believe in his innocence. Kane also discovers that the lethal fire at the airplane factory was started by a cabal of Nazi-sympathizing fifth columnists, and that the saboteurs have more attacks planned.

Dorothy Parker was one of three writers credited with the screenplay.

Not to be confused with Hitchcock's 1936 British film Sabotage, though they share some themes.