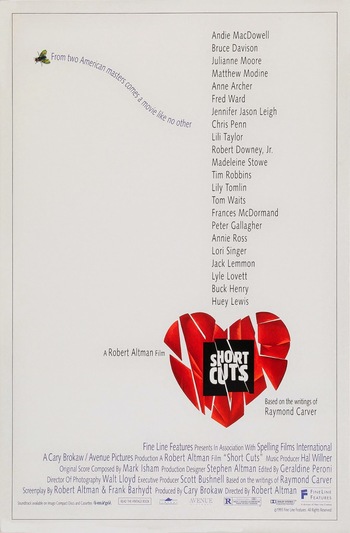 Short Cuts is a 1993 comedy-drama film directed by Robert Altman and based on nine short stories ("Will You Please Be Quiet, Please?", "Jerry and Molly and Sam", "Neighbors", "They're Not Your Husband", "Collectors", "Tell the Women We're Going", "So Much Water So Close to Home", "Vitamins", and "A Small, Good Thing") and a poem ("Lemonade") written by Raymond Carver. The film is a Hyperlink Story following 23 "ordinary" people, including eight couples, a mother and daughter, two fishermen, a grandfather, a baker, and a little kid, who go through their ordinary lives. Each story thread has loose connections with some of the others; several end in death, and most are unresolved at the end.

As the film opens, helicopters are spraying pesticide to combat a medfly infestation in Greater Los Angeles, during which we're introduced to the main characters. KCAL-TV pundit Howard Finnigan (Bruce Davison) and his wife Ann (Andie MacDowell) have ordered an expensive custom birthday cake from baker Andy Bitkower (Lyle Lovett) for their son Casey, but when he is hit by a car on his way to school and later goes into a coma, he is rushed to hospital, and the cake is forgotten, causing the oblivious but enraged Bitkower to start leaving abusive messages on the Finnigans' answering machine. In the hospital, Howard has an awkward reunion with his father Paul (Jack Lemmon), whom he has not seen since his parents divorced nearly thirty years earlier.

Next door to the Finnigans are jazz singer Tess Trainer (Annie Ross) and her cellist daughter Zoe (Lori Singer); relations between them are difficult due to Tess' alcoholism and Zoe's growing depression. At a concert given by Zoe's chamber ensemble attended by Alex Trebek and his mother, the audience includes hospital doctor Ralph Wyman (Matthew Modine) and his artist wife Marian (Julianne Moore). They strike up a conversation with the couple sitting next to them, unemployed salesman Stuart Kane (Fred Ward) and his party clown wife Claire (Anne Archer); the Wymans spontaneously invite the Kanes to dinner the following Sunday, with Stuart promising to bring the best catch from his upcoming fishing weekend. The Wymans' marriage is strained due to an adulterous affair Marian had some years earlier, while the Kanes' marriage is tested when Stuart and his fishing buddies Gordon Johnson (Buck Henry) and Vern Miller (Huey Lewis) discover a dead body on their trip and wait until they return three days later to inform the police, to Claire's disgust.

Marian's sister Sherri (Madeleine Stowe) is married to highway patrolman Gene Shepard (Tim Robbins); she is aware of his many extramarital affairs, but seems to enjoy listening to the far-fetched lies he tells to cover them up. Frustrated by the barking of the family dog, Suzy, Gene puts him in the compartment on the side of his motorcycle and leaves him by the side of the road, but has a change of heart when he sees how upset his children are at Suzy's disappearance. One of Gene's lovers is Betty Weathers (Frances McDormand), who is in the process of divorcing her husband, Stormy (Peter Gallagher), one of the pilots spraying for medflies. When she leaves with their young son Chad for a weekend with yet another boyfriend, airline pilot Wally Littleton (Charles Rocket), Stormy lets himself into their house and proceeds to take "division of assets" to its logical extreme by chainsawing every piece of furniture in the house in half except his mother's grandfather clock and Chad's television.

The driver of the car that hit Casey, waitress Doreen Piggot (Lily Tomlin), is in an on-off marriage with alcoholic limo driver Earl (Tom Waits), whom she thinks may have molested Honey (Lili Taylor), her daughter from a previous marriage. Honey's husband Bill Bush (Robert Downey Jr.) is studying to be a make-up artist, and when another couple in their apartment building, Jim and Harriet Stone, ask them to housesit for them for a month, Bill takes the opportunity to voyeuristically look through their belongings. The Bushes' friend Jerry Kaiser (Chris Penn) is the Finnigans' pool cleaner; his wife Lois (Jennifer Jason Leigh) operates a phone sex line out of their home, indulging her customers' desires while changing diapers (to the frustration of Jerry, who wonders why she never talks like that to him).

The film was nominated for an Academy Award for Best Director and won a Golden Globe for Best Screenplay.

Not to be confused with the manga Short Cuts.