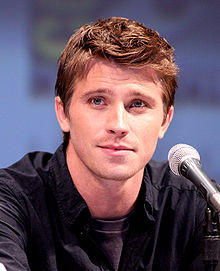 Don't get attached, he won't survive the movie.
Advertisement:

He first starred as Patroclus in Troy with Brad Pitt, then with Billy Bob Thornton in Friday Night Lights, Mark Wahlberg in Four Brothers and moved on to films like Eragon, Georgia Rule, TRON: Legacy, Country Strong and Triple Frontier.

His acting skills have enabled him to play a broad variety of characters; the little brother, the bad guy, the mysterious newcomer and plain college boys.

Along with his good looks and height, Garrett is known for playing tragic, sympathetic characters. In almost every film he stars in, he either: