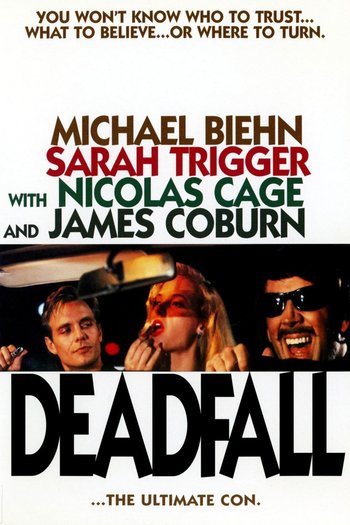 Joe Donan (Biehn) is a Con Man working alongside his father Mike (Coburn). After a con goes very wrong, Joe follows his father's Dying Wish to recover something his twin brother stole years ago. Joe's uncle Lou is a criminal and con artist as well, and soon Joe finds himself mixed up with him, Lou's Hot-Blooded soldier Eddie, and Eddie's girlfriend Diane. But things are not as they seem, and as Lou is about to pull off the con of a lifetime, a mysterious figure begins watching them in the night...

A low-grade movie with a surprisingly A-list cast, nowadays Deadfall is best known as the source of the "Nicolas Cage Screams 'Fuck'" video.

Cage reprised his role for the 2017 film Arsenal (aka Southern Fury), which featured Christopher Coppola in a cameo.

No relation to the 2012 film of the same name starring Eric Bana and Olivia Wilde.