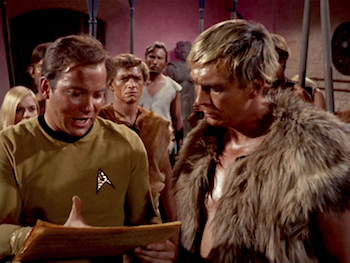 The One Where Kirk Reads The Constitution.
Advertisement:

The Enterprise discovers its sister ship the Exeter in orbit around Omega IV, not responding to hails. Kirk, Spock, Bones and Redshirt Galloway beam straight on over without taking any isolation precautions, and find that the entire crew of the Exeter has been reduced to dust and uniforms. An Apocalyptic Log left behind tells them that if they are hearing this, they are doomed. They are now infected with the same virus that killed the crew and the only possible hope of surviving is to beam down to Omega IV. Kirk and co. beam down in search of a cure and find Ronald Tracey, the former captain of the Exeter, ruling among the Kohms, who are at war with the Yangs.

Tracey has developed a taste for power and immortality, and he's not going to let petty things like the Prime Directive, basic morals or a certain charismatic Starfleet captain stand in his way.

Of all the TOS episodes, this is the one that was made into a ViewMaster set. And in another piece of trivia, "The Omega Glory" script was originally written as one of three potential pilot episodes after the original pilot "The Cage" got rejected by NBC. The aim supposedly being that the three scripts would showcase to the network different things that the series format could do (something that "The Cage" was criticized for not doing). To this end, the show being something of a literal Space Western seems designed to showcase Gene Roddenberry's original format pitch of Star Trek being a kind of Wagon Train to the Stars.