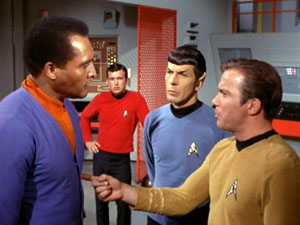 Dr. Richard Daystrom (William Marshallnote better known as Blacula and the King of Cartoons from Pee-wee's Playhouse), creator of computer systems that ships all over Starfleet use, comes aboard to supervise a test of his new M-5 multitronic computer. The M-5 was designed to markedly improve the efficiency of vessels in which it's installed, ultimately making their crews obsolete.

After a series of tests (including a great scare in which the M-5, while in control of the Enterprise, destroys an unmanned freighter) Kirk is severely concerned that the M-5 is becoming self-aware and possessed of a (severely misdirected) survivor instinct, a point which is driven home when it makes a Red Shirt who tries to unplug it live up to his title.

It's then revealed that Daystrom actually imprinted his own memory engrams on the M-5, giving it his human instincts and strategies; but, it turns out, none of his self-control or good sense. Soon the afore-planned wargames start, and M-5, tied into the Enterprise, fatally cripples a manned starship.

The head of the games and Kirk's superior, Commodore Wesley, is unable to contact Kirk because M-5 is jamming communications, and assumes Kirk is on a rogue bent. He prepares to fire on the Enterprise even as Daystrom and Kirk are talking to M-5, trying to find out why it did what it did; then McCoy notices that while Kirk is accusing Daystrom of not being thorough enough in transferring his experiences to the M-5, Daystrom is becoming, first arrogant, then quite insane, that his own creation, powered by his own thoughts, could kill people when he himself was a sworn pacifist.

Just as the threads of poor Daystrom's psyche begin to unravel, he's treated to a Vulcan neck pinch, then Kirk explains to M-5 that what it's done is murder, and the penalty for murder, as M-5 agrees, is death. M-5 shuts itself down, leaving itself, and the Enterprise, open for attack.

Commodore Wesley is just about to give orders to destroy the Enterprise when he notices her shields are down... Hesitating long enough to wonder what's wrong with the Enterprise was what caused our beloved crew to survive. Daystrom is sent to an asylum and the Enterprise goes on its way.