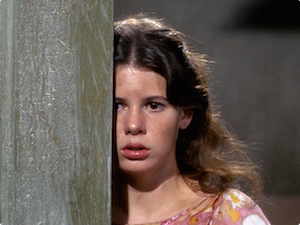 The Enterprise answers a distress beacon from a planet that seems to be a carbon copy of Earth. No one answers their hails, so they beam down to investigate. What they find looks like downtown Detroit on a bad day. As Bones forlornly inspects a decaying tricycle, a strange person covered in blue lesions attacks him. The person cries over the broken trike after being wrestled into submission. And then he dies. Further searching brings them to a building where a young girl named Miri has been hiding in a closet. She tells the landing crew about the "Grups" who all got sick and killed each other. Even the animals died, leaving the "Onlies", children of pre-pubescent age.

Soon after, Kirk realizes he has a blue lesion on his hand. They have to find a way to cure the disease, to save themselves and all the Onlies. Unfortunately, their communicators have been stolen by Miri's friend Jahn, the little bast—uh, scamp!