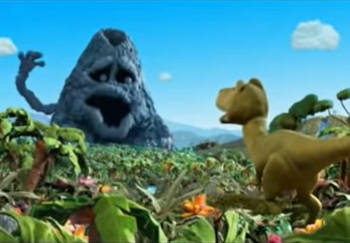 Volvic has aired several advertisements regarding their water and Volvic Revivenote A seemingly short-lived energy drink infused with ginseng and guarana. The most well known are the four that feature George the Volcano (voiced by Matt Berry) and Tyrannosaurus Alan (voiced by Tom Goodman-Hill), with the former recommending the latter to try out some of his water. You can watch the ones with George and Alan here

, and one with inventing the wheel here

These ads provide examples of: