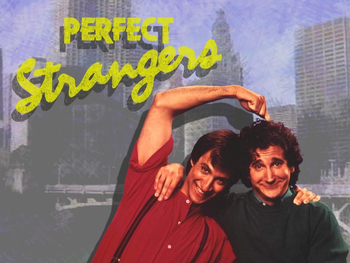 ABC Sitcom (1986-1993) about naive immigrant Balki Bartokomous, from the fictional Mediterranean country of Mypos, who comes to live with Larry Appleton, his American cousin whom he's never met. Started out as equal parts Fish out of Water and Odd Couple, took an odd turn when the Straight Man stopped being straight (comedically, that is) and started devising deranged schemes that would have made Lucille Ball dizzy (in reality, she was a big fan of the show). At that point, it became the personification of Idealism vs Cynicism, with Balki's wide-eyed idealism almost always (if not completely always) winning out over Larry's "real-word savvy" cynicism.

Was always a strange blend of stale formula and Fawlty Towers-level anarchy; survived on the not inconsiderable talents of Bronson Pinchot and Mark Linn-Baker.

The most memorable episodes feature sincere Heartwarming Moments and brilliantly performed displays of classic physical comedy, which became a hallmark of the series.

Spawned the Spin-Off Family Matters. Not to be confused with the song by Deep Purple.