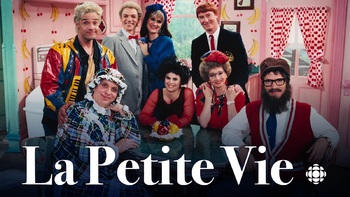 The show centers on the eccentric and dysfunctional Paré family, with the elderly Paré parents as the main characters. Jacquelinenote Played by the same male actor who played her on the comedy tour and Aimé "Ti-Mé" Paré (respectively nickamed Môman and Pôpa, French versions of "Mom" and "Pops") form the two halves of a retired couple whose marriage has long since lost its passion. Both have developed their own strange routines to give meaning to their otherwise now boring lives: Mom fusses over the increasingly massive turkeys she cooks, treating them like children (and arguably as replacement for her actual children, who are all adults now), while Popa obsesses over the state of his garbage bags and of his workshop in the basement - despite it never having come into use. The couple interact with their four children, who are just as messed up as they are: Mom must ceaselessly comfort Thérèse, her nervous wreck of a daughter; Caroline seeks new corporations and governments to rebel against; Rodrigue refuses to mentally grow out of his teenage-hood; and Rénald, The Un Favourite, desperate for his parents approval, who insists he isn't a penny pincher despite being a high-strung bank manager.

The show ran from 1993 to 1999. During its peak, La Petite Vie used to be the most watched TV show in Quebec, at one point one out of five Quebecers was watching the show's episodes on their first run. One of the episodes holds the record for the highest market share ever achieved by a television program. An oft remembered prop of the show is the parents' bed, which was laid vertically against a wall. While this was originally used during the stage show so the audience could see the actors, the bed kept this characteristic into the TV show, and was revealed to be a particular eccentricity of the elderly Paré.

In 2015, the show had a Spin-Off, Le Ti-Mé Show, a Variety Show / Talk Show where Popa receives real life personalities and interviews them with characters from the show (Most often Pogo).