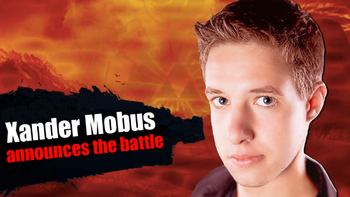 Xander Mobus (born July 8, 1992) is a Los Angeles based voice actor, known for his Star-Making Role as the Announcer to Super Smash Bros. for Nintendo 3DS and Wii U and Super Smash Bros. Ultimate, and Joker in Persona 5... and Smash Ultimate. He's quite known for his versatile vocal range, but many of his known voice roles uses a Badass Baritone voice.

My roles are what matters. Not you.

THE SHOW'S OVER.
And the winner is... I hereby sentence you to therapy for life ruination. No winners today, troper. Just kidding.
CONGRATULATIONS!!!