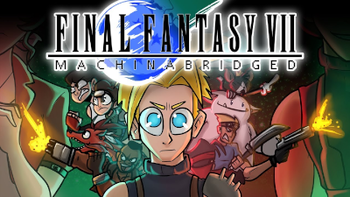 Final Fantasy VII Machinabridged is an Abridged Series and Machinima based on and filmed in the video game Final Fantasy VII. It is the first machinima series made by Team Four Star (TFS).

Unlike DBZA, the producers, directors and writers Antfish (Anthony Sardinha) and Takahata101 (Curtis Arnott) hire several guest voice actors and other YouTubers outside of TFS for most characters, hence double castings being the exception rather than the rule, for once. The footage is recorded and edited by MasakoX (Lawrence Simpson) rather than KaiserNeko (Scott Frerichs), allowing the series to be produced parallel to that of Dragon Ball Z Abridged (another series created by Team Four Star) without slowing down the latter series, especially since the script for each season has been written beforehand. As with all TFS productions, the music producer is AinTunez (Cliff Weinstein).

Not to be confused with Final Fantasy VII Abridged.

As a parody of Final Fantasy VII, it is assumed that viewers are familiar with the source material. Due to this, spoilers related to the original narrative will not be marked.

Can you do me a solid and list the Tropes?

This is the tale... of AVALANCHE TIME!!* MOTHAFUCKAAAAAAA!!