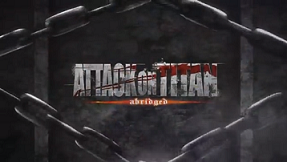 Attack on Titan Abridged was an Abridged Seriesnote Or rather, a one-shot parody, since a single episode isn't a series made by Takahata101

of Team Four Star; it was, of course, based on the anime and manga series Attack on Titan.

The first episode of Titan Abridged premiered on YouTube in late 2013; YouTube removed the video for copyright violations two months later. Team Four Star then said it would host the show on their home website—which it did for a time—but then the group received a takedown notice that forced the episode offline. The combination of legal issues and the changing schedules and workloads of other TFS projects forced the group to abandon the series. Takahata is still pissed off about that. Before this, though, TFS had released a video with various characters singing, in honor of the premiere of Attack on Titan official English dub on Adult Swim's Toonami block.

Do not confuse this with Abridged on Titan, though one of the cast members from that series does appear here.

During its brief existence, Attack on Titan Abridged contained the following tropes:

Take what you remember from Keith, and crank that up to Eleven: and you get the Abridged Keith Shadis.

Take what you remember from Keith, and crank that up to Eleven: and you get the Abridged Keith Shadis.