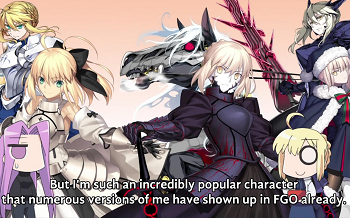 So many, there's a version out to kill her other versions.
"I am the result of Hideaki Anno failing to make my character unsettling, and instead my very archetype was copied repeatedly."
— Rei Ayanami, Evangelion Abridged
Advertisement:

Basically, when a character has been copied enough times, that works start making jokes about how often the character is copied.

Let's say Bob the Slayer is the Breakout Character in a hit film. Then just about every similar movie uses characters like Bob The Slayer, and then all the comics, and all video games, and even original characters made by gamers playing games with Character Customization. This trope comes into play when a work mocks about how Bob the Slayer always shows up.

A Sub-Trope of Fountain of Expies.