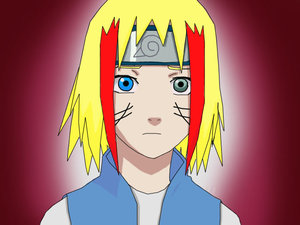 Nar-Sue-to, Naruto's Wonderful twin sister, she carries the six-tailed weasel the most powerful of the tailed-beasts and also the creator of Naruto's world, has all of her brother's skills, and more including their parents undivided attention. She has golden-blond shoulder length tresses with red highlights, green and blue eyes and wisker marks just like her brother (author note: How cute!!). She woar a vest blue like the sea and a white shirt as bright as the snow and an orange and pink mini-skirt with purple tights under it. She was also wearing underwear but you totally couldn't see them, YOU PERV!! Original Character! Do Not Steal!

Super OC: Your bloodline is very special, it is a very special doujutsu with all of the abilities of the Sharingan and the Byakugan.
Naruto: So does that make me half Hyuuga and half Uchiha?
Super OC: No, it just means that the author realized that coming up with a useful doujutsu is harder then it seems, so they copped out and combined the two given to them.
— Sigfried27

taking a potshot at this trend.

A lot of fanfic writers start up because of their passion for a show. While any number of things can be the source of passion, a very common fixation is on one of the primary characters. So they start to write something because of their passion for this character, but they find something about the character that doesn't mesh well. Maybe they're the wrong gender or are otherwise not close enough to the author's expectations. Or, alternatively, the author wants to pair their favorite character up with somebody, but "nobody is good enough for them". In any case, rather than put them through the Possession Sue process, they just get a Clone-O-Matic™ and out pops a Copy Cat Sue.

The Copy Cat Sue is a common occurrence, marked by their uncanny resemblance to a canon character. This is usually most blatant when it involves traits that are supposed to be unique in The 'Verse, but pretty much anything where the Backstory and key character traits of the two characters are nearly interchangeable counts. The canon character is the last of their kind? Well, so is this character! Abusive Parents? This character can sympathize! The canon character has a unique Transformation Trinket? It's not unique any more! They might even have another Team Pet of the exact same species, and they get along with the canon pet absolutely fine! And any markings or iconic disfigurements (such as scars or a missing limb) the canon character has, this character will also have, in exactly the same place ... somehow.

Naturally, they are instantly accepted into the group and have to go on a mission where they kill the Big Bad, slay The Dragon and, provided they're sexually compatible (not like it stops them from trying, though), they'll inevitably pair off while flipping the bird to the Official Couple (extra points if the canon character's original love interest randomly turns evil or worse, is revealed to have always been evil). Or die. That happens sometimes.

A fairly common storyline that lampshades this is where the Big Bad (or, perhaps, just a neutral Mad Scientist; it's almost unheard of for anybody without a direct connection to the hero and his True Companions) makes an actual clone of the character (usually of the opposite sex, but not always). They play themselves off as family members from out of state, or exchange students from Mary Suetopia, but they have a mission to off the main character when they get the say so. Of course, since 99% of the Copy Cat Sues out there are synthesized to allow the author to imagine being both the canon character and friends/lovers with them, they'll betray their creator and join with the heroes (who, despite the character's connection with the bad guys, will rarely question them for very long), usually proceeding to kill the Big Bad, slay The Dragon, and become best friends/lovers until the end of time. Or die. That happens... a lot really.

A telltale sign of such a character is that any "fan art" of the character will actually just be recolored images of characters from the actual show and that may or may not explain why, say, Sailor Earth has a crescent moon on her forehead. Some get more creative and edit their source image a little in an attempt to make them look a little less like the character they copied. A precious few can be bothered to actually create real art, but nine times out of ten, even that art will simply be traced from a picture of the source character.

In either case, the character might be intended as a replacement for the canon character, but without whatever icky traits the author hates. They'll then rob the spotlight, prove the canon character to be unworthy of his/her position, and either relegate the character to obsolescence or, perhaps, even remove them entirely. Sometimes, this is done because the author likes the villain and wants them to be friends/lovers with the other character, but can't find any real reason that they wouldn't kill each other. Thus, to get the ending they want, they just make somebody that practically is the other character but without the key trait of wanting the villain dead. Yay, Fanfiction!

No Examples, please! This only defines the term.