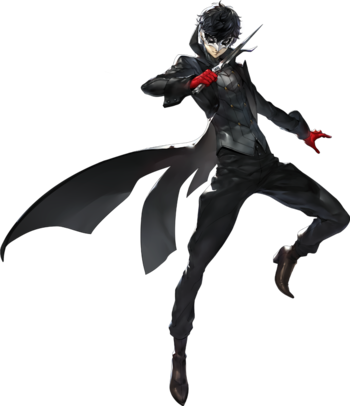 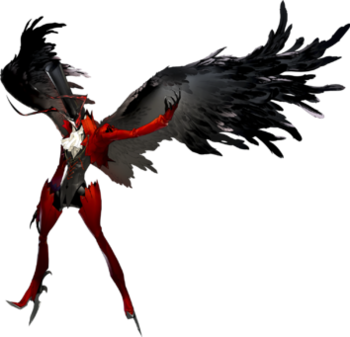 The Pillager of Twilight
Click here to see his Ultimate Persona 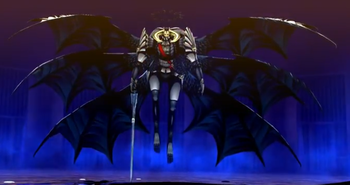 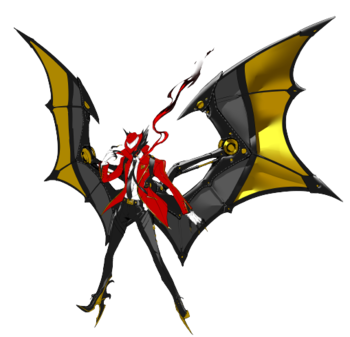 The Great Thief
The Leader of the Phantom Thieves
The show's over.
Arsène: "I have heeded your resolve. Vow to me. I am thou, thou art I... Thou who art willing to perform all sacrilegious acts for thine own justice! Call upon my name, and release thy rage! Show the strength of thy will to ascertain all on thine own, though thou be chained to Hell itself!"
Advertisement:

The game's main character, a second-year high school student who is transferred to Shujin Academy in Tokyo after being put on probation after being falsely charged with assault after stopping a would-be molester that happened to have connections. While he seems meek and passive, this behavior hides the heart of a trickster that eventually leads to him becoming "Joker", a notorious Gentleman Thief. He is aligned with the Fool Arcana and is subsequently the resident holder of the Wild Card. As such, he can switch between hundreds of Personas at will, and said Personas can grow stronger through fusion and bonding with others.

His Persona is Arsène, the hero of Maurice Leblanc's Arsène Lupin novels. One of fiction's most famous thieves, Lupin is the archetypal Phantom Thief, a gentleman who steals from criminals worse than himself, both for profit and for the fun of it. As a Persona, Arsène looks like an almost demonic version of the original hero, combining his standard classy attire with massive black wings, long-fingered hands, and a constant Cheshire Cat Grin, all topped off with red and black attire.

His ultimate Persona is Satanael, the Gnostic equivalent of the Devil. Depending on the tradition, Satanael is either another aspect of God himself, or the greatest of God's angels, who rebelled against his creator in an attempt to steal back his freedom, only to be cast down from Heaven for his pride. In Persona 5, Satanael combines aspects of both, sporting elements of Yaldabaoth the Demiurge (ironically enough) and Shin Megami Tensei's standard interpretation of Lucifer, the Rebel King of Hell.

His third-tier ultimate Persona in Royal (obtainable only by purchasing DLC) is Raoul, an alias that Arsène has used in multiple stories and notes it as his middle name. In The Damsel with Green Eyes, Lupin uses the alias Viscount Raoul D'Andresy and was referred as such in the entire book. This name seems to more directly refer to the story "The Queens Necklace" where it tells the tale of a young boy named Raoul who stole the valuable necklace at the young age of 6. In actuality, the boy is none other than a young Lupin and it's heavily implied that Raoul is his real first name. Raoul appears as a modern gentleman in a red coat and fedora, smoking a cigarette, with black and gold mechanical wings.

No relation to the Clown Prince of Crime or the characters featured in the Persona 2 duology.